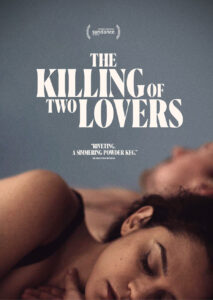 stark, slow-burn drama never quite goes where you expect. An evocative and atmospheric transmission from wintry Utah, THE KILLING OF TWO LOVERS is a compact, economical portrait of a husband and father trying to keep it together while seething with rage during a trial separation from his wife. An interior drama set mostly outside, on the vast, lonely street where David (a knockout Clayne Crawford) stays with his ailing father just a few doors up from his wife Niki (Sepideh

Moafi) and their four kids, Machoian’s film compassionately depicts a family in crisis, while moving at the ominous pace of a thriller. A complex, brooding soundscape from Peter Albrechtsen that seems to emanate directly from the head of its

disturbed protagonist, and a claustrophobic aspect ratio contribute to the powerful emotional register of this impressive new work of American independent cinema. Director and writer Robert Machoian joins us for a conversation on the layered storylines, pulling together a superb cast and the importance of calibrating the appropriate atmospherics, such as sound and cinematography, to create a compelling film that punches way above it’s weight class.

For news and screenings go to: neonrated.com/films/the-killing-of-two-lovers

About the filmmaker – Robert Machoian – Director & Writer. Born in the small town of King City California, and raised up in the DIY Punk culture, Robert has been taking photographs his whole life and making films for well over a decade. His films have premiered at the Sundance, SXSW, LA, and Tribeca Film Festivals in the States and have screened at festivals around the world. His second feature, God Bless the Child, made with his directing partner Robert Ojeda-Beck, received a rave review in The New York Times and won numerous awards, including best film at CPH:DOX, even though it was a narrative hybrid. Robert and Rodrigo were then nominated for a Cinema Eye Honors Heterdox and Indie Spirit Filmmaker to Watch Awards. Focusing on people living everyday lives whose stories often go untold, they bring their unique vision to weave deeply personal stories that absorb their audiences. Robert has won awards for his cinematography and his photographs have appeared in magazines at Filmmaker Magazine, Indiewire, and Bright Ideas. His work comes from the intimate experiences of his life and the lives of those around him. In 2019 Robert had his fourth short film go to the Sundance Film Festival, which won the Jury Prize for Directing. He is currently working on his first solo feature film. For more: robertmachoian.com

About the filmmaker – Clayne Crawford Producer and Lead Actor is an Alabama native that made his jump to Los Angeles in 1997 and immediately began work in numerous theatre productions. It wasn’t long before his talents were recognized on the big screen with major roles in A Walk to Remember, Swimfan, and A Love Song for Bobby Long. Clayne continued to build his fan base with eclectic roles on hit TV shows such as 24, The Glades, All Signs of Death, and Rectify. His most recent success was the lead role of Martin Riggs in the TV series Lethal Weapon.For more: claynecrawford.online

“A rural counterpart to Marriage Story … driven by a viscerally raw performance from Clayne Crawford.” – David Rooney, The Hollywood Reporter

“The Killing of Two Lovers is flawless in so many ways; the poignant acting, the brilliant sound design, with a narrative so crisp and succinct that not a single moment is wasted.” – Natasha Alvar, Cultured Vultures

“It can best be defined as a cautionary tale dedicated to the fragility of the family structure in the United States, a showcase of a radically talented filmmaker and a dedication to the painful reality of love.” – Jonathan Christian, The Playlist