THE LAST OUT tells the story of three talented Cuban athletes, Happy, Carlos, 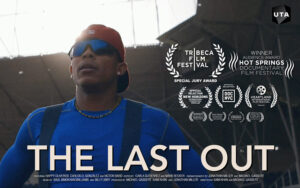 and Victor, leave their families and homes behind as they set off in pursuit of the ultimate dream: a contract with Major League Baseball. Cuban ballplayers are among baseball’s brightest stars but Cuban ball-players can’t just sign out of Cuba – the US Embargo is still in place and only being strengthened under the current administration – so Cubans have to leave their homeland, often under dangerous circumstances and establish residency in a

third Country like The Dominican Republic, Haiti or Costa Rica. At the rundown Estadio Antonio Escarre, they have spent the past year training long and hard, thousands of miles away from their families in Cuba. They travel to Costa Rica and train under a seedy

sports agent who dangles promises while exploiting their talents. As they navigate immigration and the ulterior motives of handlers, each man finds an unexpected path forward to a better life. Set against the backdrop of the dangerous Central American migrant trail, THE

LAST OUT offers a rare window into the dark side of professional sports. THE LAST OUT co-directors Sami Khan and Michael Gassert stop by to talk about their process of following the many twists and turns these young men’s lives take them on and the personal risk they and their team took in chronicling it.

Sami Khan’s most recent film, the short documentary St. Louis Superman (with Smriti Mundhra), was nominated for an Academy Award® and won a Special Jury Prize at Tribeca in 2019. Michael Gassert’s documentary and archival work has been supported by IFP, the Sundance Institute, UNESCO, and the Kennedy Center.

“The incredible journey of three people pursuing a dream. They start as baseball players but end up as pawns…” – Ricardo Gallegos, La Estatuilla

“Taking audiences on an eventful journey, The Last Out is an eye-opening example of the intersection of sports, geopolitics and individual liberty.” – Shane Slater, Awards Radar

“It may be dizzying to see everything that’s thrown at Oliveros, Gonzalez and Baro, but the filmmakers catch all of it with considerable grace.” – Stephen Saito, Moveable Fest