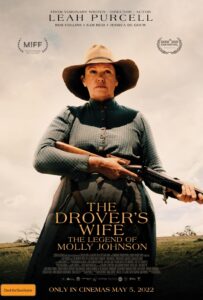 Molly Johnson (Leah Purcell) and her children struggle to survive the harsh Australian landscape; her husband is gone, droving sheep in the high country. Molly then finds herself confronted by a shackled Aboriginal fugitive named Yadaka (Rob Collins). As an unlikely bond begins to form between them, secrets unravel about her true identity. Meanwhile, realizing Molly’s husband is missing, new town lawman Nate Clintoff becomes suspicious and

sends his constable to investigate. The deadly encounter between Molly, Yadaka and the constable results in a tragic chain of events with Molly becoming a symbol of feminism and anti-racism. THE

LEGEND OF MOLLY JOHNSON is a reimagining of Leah Purcell’s acclaimed play and Henry Lawson’s classic short story. Director, producer and co-screenwriter Leah Purcell joins us for a conversation on her searing Australian revenge tale and a stark revisionist Western, and a film that offers a powerful new interrogation of Australian history and a universal story of what a mother will do to protect her children.

For updates & screenings go to: samuelgoldwynfilms.com/the-drovers-wife

About the filmmaker – Leah Purcell is a multi-award winning director, actor, producer, screenwriter and showrunner.. She has written and directed landmark Australian film, television and theatrical work now part of the Indigenous canon such as Box the Pony, Redfern Now, Cleverman, The Secret Daughter and The Drover’s Wife.  At the core of Leah’s storytelling are female and First Nations themes, characters and issues. The Drover’s Wife The Legend of Molly Johnson film started its life as a play, The Drover’s Wife written by and starring Purcell, which premiered in late 2016.  The play swept the board during the 2017 awards season, winning the Australian equivalent of the Tony, Pulitzer, Olivier, Peabody and Booker Prize awards for Literature, Theatre and Excellence in Writing.  The play was then adapted in to a screenplay alsowritten by, directed and starring Leah Purcell and is slated for a late 2021 release.

“An engrossing thriller. Purcell throws herself into the central role with fiery conviction.” – David Rooney, The Hollywood Reporter

“This riveting film from an anti-colonial, feminist, First Nations lens is something to be celebrated.” – Stephen A. Russell, Time Out

“Wow, Leah Purcell, wow. With The Drover’s Wife: The Legend of Molly Johnson, you have made an instant classic in Australian film.” – Stephen Romei, The Australian