Andreas Koefoed’s THE LOST LEONARDO centers on the sale of 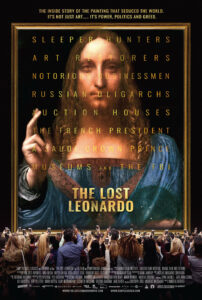 Salvator Mundi (Savior of the World), a portrait of Christ purportedly by Leonardo da Vinci, which in 2017 was auctioned by Christie’s for $450 million, a world record for any work of art. The bizarre story of its provenance, the intrigue surrounding its multi-year restoration, and the worldwide controversy regarding its authenticity are all recounted in a non-stop narrative conflating art world drama, international politics, and high-level financial shenanigans. Art dealers, curators, FBI and CIA agents, journalists, restorers, historians, a Russian

oligarch, a Saudi prince, and the director of the Louvre are drawn into this exciting -and revealing documentary that exposes the frictions inherent in the sale of great art. Unravelling the hidden agendas of the richest men and most powerful art institutions in the world, THE LOST LEONARDO reveals how vested interests in the Salvator Mundi are of such tremendous

power that truth becomes secondary. As its price soars, so do questions about its authenticity: is this painting really by Leonardo da Vinci? Director Andreas Koefoed (Ballroom Dancer, The Arms Drop, At Home In The World) joins us to talk about tracking down the story behind this unbelievable story and if some of the remaining mysteries explored in the documentary will ever be fully revealed or understood.

For news and updates go to: thelostleonardodocumentary.com

About the filmmaker – Andreas Koefoed is a film director, born in 1979 in Copenhagen.  He graduated in documentary direction  from The National Film School of Denmark in 2009 and holds a BA in sociology from Copenhagen University. Koefoed has directed documentary films since 2001 with a focus on character driven human interest stories, among them Ballroom Dancer, The Arms Drop and At Home In The World. His films have been selected for film festivals across the world, winning numerous awards including at IDFA, CPH:DOX, Full Frame, AFI Docs, Sheffield Doc Fest and Tribeca. For more go to: andreaskoefoed.com

“A bona-fide cinema crowd-pleaser. A three-act morality play where qualms are scant and art world egos run riot in the face of wealth and power and raw, dripping greed.” – Fionnuala Halligan, Screen Daily

“This engrossing documentary plays like a great detective story. Plenty of unexpected twists and turns guarantee that you’ll get wrapped up.” – Mike McGranaghan, Aisle Seat

“A head-spinning yarn…populated by self-important art experts, steely-eyed Russian oligarchs, and haughty auction house owners whose only vested interest in the authenticity of the painting lies in how much they can get for it.” – Bill Newcott, The Saturday Evening Post

“As thrilling to watch as any fictional crime narrative, THE LOST LEONARDO is also a straightforward and unflinching indictment on the way power is brokered. A tightly structured film that never drags, only more exciting the deeper it pulls you in.” – Artemis Lin, The Film Stage