Using the eponymous 1978 best-selling book as its frame, THE MEANING OF HITLER is a provocative interrogation of our culture’s 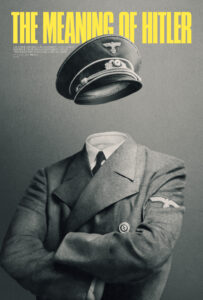 fascination with Hitler and Nazism set against the backdrop of the current rise of white supremacy, the normalization of anti-semitism and the weaponization of history itself. Shot in nine countries, the film traces Hitler’s movements, his rise to power and the scenes of his crimes as historians and writers, including Deborah Lipstadt, Martin Amis, Sir Richard Evans, Saul Friedlander, Yehuda Bauer, and famed Nazi hunters Beate and Serge Klarsfeld, weigh in on the lasting impact of his virulent ideology. THE MEANING OF HITLER is an intellectual inquiry with burning present-day resonance. It is also a road trip through some of the darkest chapters of European history. As fears of authoritarianism and

fascism now abound, the film explores the myths and misconceptions of our understanding of the past and the difficult process of coming to terms with it at a time in our history when it seems more urgent than ever. Co-directors Petra Epperlein and

Michael Tucker’s dynamic documentary examines the ways we think about the Holocaust — and the ways we choose not to. As one of those interviewees, novelist Martin Amis, observes, “Our understanding of Hitler is central to our self-understanding. It’s a reckoning you have to make if you’re a serious person.

For news and updates go to: ifcfilms.com/films/the-meaning-of-hitler

About the filmmakers – Petra Epperlein and Michael Tucker, aka Pepper & Bones, are a husband-and-wife team who work between New York and Berlin. Epperlein was born in Karl Marx City, GDR and began her professional life as an architect. Tucker was born in Honolulu, Hawaii and fell into camerawork after an accident on a factory trawler led him to pick up his first camera. They met in New York in 1994 and immediately began work on the THE LAST COWBOY—one of the earliest examples of digital film. Later travels took them to the African bush, the Australian outback, Cuba, and the Balkans until they stumbled upon their first documentary in the Iraq War. That film, GUNNER PALACE, premiered at Telluride and TIFF in 2004 and led them directly to their second feature, THE PRISONER OR: HOW I PLANNED TO KILL TONY BLAIR, which told the story of an Iraqi journalist seen arrested in GUNNER PALACE and later sent to Abu Ghraib. The film premiered at TIFF in 2006 and was later nominated for an Independent Spirit Award. In 2007, they captured the life of a German armored car salesman in BULLETPROOF SALESMAN against the backdrop of spiraling violence (and demand) in Iraq and Afghanistan. Returning to Americain 2008, they followed the soldiers of GUNNERP ALACE home in HOW TO FOLD A FLAG, which premiered at TIFF in 2009. One of the characters in that film led them to the world of MMA fighting in FIGHTVILLE .In 2013, their film THE FLAG, for CNN Films, looked at the symbols and icons of 9/11 America. Their most recent documentary is KARL MARX CITY, which follows Petra Epperlein to her GDR hometown of Karl Marx City in search of the truth about her late father’s suicide and his rumored Stasi past. The film screened at festivals worldwide in 2016, including TIFF and the NewYork Film Festival, and was released theatrically in 2017.  For more go to: pepperandbones.com

“We go into “The Meaning of Hitler” craving that millimeter of insight, of intrigue and revelation. And the film provides it. It ruminates on Hitler and the Third Reich in ways that churn up your platitudes.” – Owen Gleiberman, Variety

“It explains and builds a compelling relationship between the cultural normalization of Nazism and recent far-right movements.” – Ricardo Gallegos, La Estatuilla

“This is an agitated, bemused, and terrified piece of work that gets under the skin of Nazism without adding to its negative glorification.” – Chris Barsanti, PopMatters