THE MUSTANGS: AMERICA’S WILD HORSES takes audiences on an odyssey 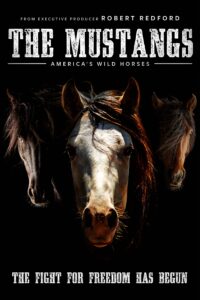 throughout America to places few people have seen or even know about. There are more than 80,000 wild horses on our public lands and more than 50,000 in government corrals.  THE MUSTANGS also shines a spotlight on the work of Operation Wild Horse, an organization, that pairs mustangs and veterans with PTSD.  Centered around the history and current situation of these American icons, the film’s

GRAMMY®, Emmy® and two-time Golden Globe® award winner. THE MUSTANGS: AMERICA’S WILD HORSES is an amazing story about America’s wild horses from their turbulent history to their uncertain future. Co-directors Steven Latham and Conrad Stanley join us for a conversation on these iconic American animals, how close they came to extinction, the heroic efforts of a housewife / farmer from Nevada literally changed the fate of these magnificent creatures and the amazing production team that includes Robert Redford, Patti Scialfa Springsteen and USA Olympic Equestrian Silver Medalist Jessica Springsteen.

For news and updates go to: themustangsfilm.com

“The film’s production quality is rich with dazzling visuals of desert landscapes and mustangs galloping across the plains, making The Mustangs: America’s Wild Horses a delight to watch.” – Jordan Elizabeth, Common Sense Media

“An engrossing documentary introduces the viewer to these free souls whose existence is in peril.” – Jeanne Kaplan, Kaplan vs. Kaplan