At the turn of the 1900’s, two years after a quiet murder involving an out-of-town 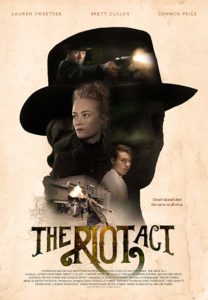 stage actor and a local doctor’s daughter, an esteemed Opera House welcomes a progressive Vaudevillian troupe from the East for its first performances since the tragedy; and along with it, a veiled actress with a curious intent. With tensions still thick surrounding past events, this mysterious performer discovers she isn’t the only one seeking revenge: someone or something has been “haunting” the assailant already. When the two conspirers uncover each other’s secrets, they decide their dual efforts will be more successful in subduing their enemy. THE RIOT ACT is a multi-award winning independent film that deftly immerses audiences in a layered tale of a caste system on the brink of violence where humanity and love are expendable in the eyes of society in the early 1900’s.

For news, screenings and updates go to: riotactmovie.com

“Murder, betrayal, revenge—“The Riot Act” has it all, and the why’s and when’s and where’s come trickling in so the audience has to stay on its toes to catch it all.” – Marie Asner, Phantom Tollbooth

“Despite the fact that it is a low budget film Parks has not allowed that to limit his story or the way he wants it told.” – Carey-Ann Pawsey, Orca Sound

“While there are a few narrative implausibilities, they never derail the story, and while the story takes on a bit more thematically then it can ultimately deliver, it is generally preferable that a film’s reach exceeds its grasp.” – Dan Jardine, Cinemania

“A troupe that claims to offer “high-end vaudeville” arrives, not only to seriously heat up plot possibilities, but prove that Parks might have a real future at the movies.” – John Urbancich, Your Movies (cleveland.com)