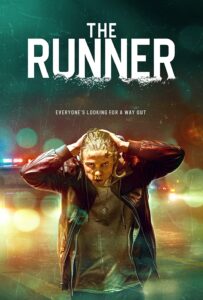 Philipponnat) has one last chance to get his life back on track. His lucrative side hustle dealing drugs to his classmates and his own personal addiction has forced his distraught mother to turn him over to the police. Detective Walls (Cameron Douglas) offers to save him from prosecution if he’ll pose as a drug dealer and lure his supplier, a fellow simply referred to as Local Legend (Eric Balfour), to a party where Aiden will wear a wire. Aiden’s life

has been complicated by the fact that he is tormented by guilt over his responsibility for the overdose of his girlfriend Layla (Kerri Medders). As the sting operation is set in motion, Aiden falters, threatening to jeopardize the deal with the police and his very life. Director / Producer Michelle Danner joins us for a conversation on the making of her latest film thriller The Runner, as well as her life long connection to filmmaking and acting, first through her father’s career and later as one of the most sought after acting teachers in Hollywood.

For updates and screenings go to: archstoneent.com/the-runner

About the filmmaker – Director Michelle Danner has taught acting for the last 29 years and has worked with many A-List Actors privately and on set such as Henry Cavill, Gerard Butler, Abigail Breslin, Zooey Deschanel, Penelope Cruz, Andy Garcia, Salma Hayek, James Franco, Seth Macfarlane, Michelle Rodriguez,  Isla Fisher, Luke Wilson,Emily Van Camp, Donald Sutherland,  Kyle MacLachlan,  Mireille Enos, Taryn Manning, Ryan Phillippe, Chris Rock,  Enrique Murciano, Josh Bowman. Based on Michelle Danner’s last 30 years of supporting both A-List and up and coming actors to fulfill their maximum potential, film director and international acting coach Michelle Danner has distilled the best ideas and practices of the major acting  techniques; Stella Adler, The Sanford Meisner, Lee Strasberg, Uta Hagen, Chekhov, & Stanislavsky so artists can draw upon them and utilize the strengths of each. Every actor is unique, so you will learn to form a toolbox of your own, your very own “Golden Box”. Through studying Michelle Danner’s acting technique you will accumulate a comprehensive set of “acting tools” you can use when approaching a role or a scene, whether it be for film, television, or theater.For more go to: michelledanner.com