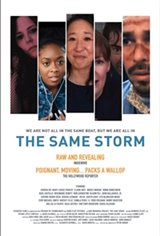 pandemic, THE SAME STORM is an intimate look into the lives of twenty-four characters as they journey through the spring and summer of 2020. With lockdowns, the Black Lives Matter movement and the looming 2020 elections as key backdrops, the film explores the necessity of human connection, family, love and the ability to find empathy during a fraught, untenable time.  Featuring an all-star cast, including Sandra Oh, Mary-Louise Parker, Elaine May, Moses Ingram, Raul Castillo, Noma Dumezweni, Sandra Oh, Mary-Louise

For updates and screenings go to: thesamestorm.com

Juno Films has acquired rights to the experimental drama The Same Storm, from writer-director Peter Hedges (Ben Is Back), for distribution in the U.S., Canada and the UK. The film will open October 14th at the Quad Cinema in NYC and Laemmle NoHo and Santa Monica with additional cities to follow.

About the filmmaker – Peter Hedges ​adapted his first novel ​WHAT’S EATING GILBERT GRAPE ​into the critically acclaimed film of the same name. In 2002, he received an Academy Award nomination for co-writing the adaptation of Nick Hornby’s ​ABOUT A BOY​.​ He wrote and directed ​PIECES OF APRIL  (​2003), co-wrote and directed DAN IN REAL LIFE ​(2007), co-wrote and directed ​THE ODD LIFE OF TIMOTHY GREEN ​(2012) and most recently wrote and directed​ BEN IS B​ACK (2018). Hedges is also the author of the novels AN OCEAN IN IOWA (1998), THE HEIGHTS (​2010) and twelve plays including IMAGINING BRAD (Circle Rep), BABY ANGER (Playwrights Horizons), THE GIRL IN PINK (The Atlantic Theater Company) and GOOD AS NEW ​(MCC Theater).

“A grab bag that mostly engages your attention and sticks in the mind as a vivid slap-dash portrait of a city and, by extension, a world under siege.” – Todd McCarthy, Deadline Hollywood Daily

“This film leaves us moved and provoked – and impressed with its technical accomplishments – even if it isn’t a perfect distillation of our ongoing national nightmare.” – Stephen Farber, Hollywood Reporter

“The sum of Hedges’ film is greater than any of its parts, even if its parts are not always worthy of the people who have been hired to play them.” – David Ehrlich, indieWire