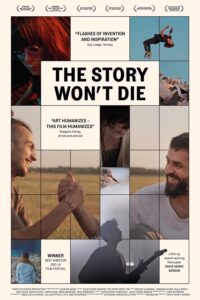 (Medhat Aldaabal), and visual artists (Tammam Azzam, Omar Imam and Diala Brisly). All of these talented artists use their art to rise in revolution and endure in exile in this new documentary reflecting on a battle for peace, justice and freedom of expression. It is an uplifting and humanizing look at what it means to be a refugee in today’s world and offers inspiring and hopeful vantages on a creative response to the chaos of war. Director David Henry Gerson stops by to talk about his exploration of artists / activists forced to flee one of the world’s most repressive regimes, away from family and loved ones, but still committed to their art, community and hope for a time when they can return to their beloved country.

For updates and screenings go to: thestorywontdie.com

About the filmmaker – David Henry Gerson is a filmmaker whose work has won prizes from the Academy of Motion Picture Arts and Sciences, the Sundance Film Festival, and has been acquired into the permanent collection of the Museum of Modern Art in NY. He is a graduate of Columbia University and the American Film Institute, where he was the recipient of the AFI Richard P. Rodgers Award for Creative Excellence. His film, ALL THESE VOICES, won the Student Academy Award®. David’s spec screenplay, ABOVE KINGS, was nominated to the Tracking Board Hit List and was a semifinalist for the Academy’s Nicholl Fellowship. His documentary film ULTRA VIOLET FOR SIXTEEN MINUTES (“Totally engaging” – Al Maysles), screened at festivals worldwide, the Pompidou Museum in Paris, and was acquired into the permanent collection of the MoMA. THE STORY WON’T DIE is his debut feature. For more go to: davidhenrygerson.com

“The outrage in these artists will always remain, but The Story Won’t Die shows how they come to find some wisdom about it, too.” – Alan Zilberman, Washington City Paper

“Personal and important, The Story Won’t Die is not only a needed piece of cinema but is also a quite rewarding one.” –  Carson Timar, Clapper

“It’s very moving to hear them and realize how consistent these experiences are, and to realize how resilient these people are.” – Wade Major, FilmWeek (KPCC – NPR Los Angeles)