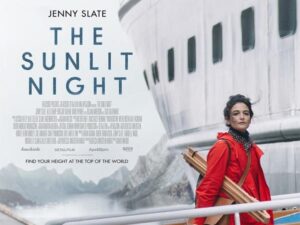 off to a terrible start for Frances (Jenny Slate). Her art school project fails, her boyfriend unceremoniously kicks her out of his Hamptons home, and, to top it all off, her younger sister reveals she’s engaged just moments before her parents announce their separation. Hoping to invigorate her work and expand her horizons Frances hastily takes an opening for an art residency in Norway and heads off to an isolated island where the sun never sets.

In a remote village, among the locals, she meets a fellow New Yorker (Sharp), who has come in search of a proper Viking funeral only to find that the Chief (Galifianakis) is but a re-enactor from Cincinnati. The eclectic crew ranges from “home” to

“lost,” within the extreme and dazzling landscape of the Far North. Under a sun that never quite sets, and the high standards of an unforgiving mentor, Frances must navigate between ambition, desire, obligation, and risk in order to find a way forward. Author and screenwriter Rebecca Dinerstein Knight joins us to talk her collaboration with actor / producer Jenny Slate and director David Wnendt and finding the right mixture of understated drama and absurdist spirit that informs this charming gem of a film.

For news and updates go to : The Sunlit Night

About the filmmaker(s): “I wrote The Sunlit Night as a stranger in a foreign land: no Jewish New Yorkers had ever moved to the Norwegian Arctic for no reason before, so the locals told me, on the island I had come to share with them, 95 miles north of the Arctic Circle and floating in the Norwegian Sea. Without any Norwegian ancestry to justify my journey, I could only explain my sudden relocation to the Lofoten Islands as a search for beauty, an opportunity to test language against a supreme landscape. I wanted to write about rapture. In the story that resulted, and in our faithful film, the gruffness of ancient mountain rock meets the unpredictable softness of goat’s fur; cultures clash and form new harmonies. Living alone at the top of the planet drove me to ask what connection means. What makes a person feel at home in the world, and who is responsible for the warmth of a welcome? Can geography exert emotional force? How can a woman communicate herself in the absence of common language and custom? How does the practice of art transcend practical circumstances? This is a movie about stretching oneself over the abyss of the unknown and touching the other, quieter side. The blankness and newness that open up there carry the risk of incredible loneliness, and the promise of wild revelation.” Writer Rebecca Dinerstein Knight

Director David Wnendt made his mark at the 2014 Sundance Film Festival with Wetlands, adapted from the best-selling novel by Charlotte Roche. His next film, Look Who’s Back, grossed over $20 million and was released by Netflix. Wnendt’s debut film, Combat Girls, earned him the Bavarian Film Award for best young director and the Prix Genève Europe for best fiction script by a newcomer. Wnendt was one of Variety’s “10 Europeans to watch” for 2016.