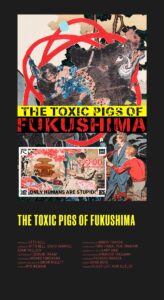 the aftermath. Along the way, other citizens who still live near the reactor share their perspectives on the aftermath. THE TOXIC PIGS OF FUKUSHIMA was inspired by the photographs of co-producers Toru Hanai and Yuki Iwanami. The original score was written and performed by renowned ambient artist Midori Takada. Directed by Otto Bell (The Eagle Huntress) THE TOXIC PIGS OF FUKUSHIMA has been acquired by VICE and will be featured in “The Short List with Suroosh Alvi,” an upcoming series from VICE World News. The Short List is a collection of the world’s best documentaries curated by VICE founder Suroosh Alvi.

Watch The Toxic Pigs of Fukushima

About the filmmaker – Otto Bell runs Courageous, a commercial studio of filmmakers and designers based in New York. He has directed over fifteen documentary films as far afield as Uganda, Japan, Egypt and Vietnam for brands such as IBM and Philips. During a decade in the industry, he has also created and produced multi-award winning world affairs programming such as “Horizons” on BBC World News and “Shunya” on Times Now of India. Otto is a graduate of Oxford University and the prestigious WPP Fellowship Scheme. He lives in Manhattan, but originally hails from Northern England.

The Earthquake And Tsunami – The magnitude-9.1 earthquake struck March 11, 2011 at 2:46 PM. The epicentre was located some 80 miles (130 km) east of the city of Sendai, Miyagi prefecture, and the focus occurred at a depth of 18.6 miles (about 30 km) below the floor of the western Pacific Ocean. The earthquake triggered a shut down of the three active reactors at the  Fukushima I Nuclear Power Plant (Fukushima Dai-Ichi). The ensuing tsunami crippled the site, stopped the Fukushima I backup diesel generators, and caused a station blackout. The subsequent lack of cooling led to explosions and meltdowns at the Fukushima I facility, with problems at three of the six reactors and in one of the six spent-fuel pools. The March 11, 2011, earthquake was the strongest to strike the region since the beginning of record keeping in the late 19th century, and it is considered one of the most powerful earthquakes ever recorded. Hundreds of aftershocks, dozens of magnitude 6.0 or greater and two of magnitude 7.0 or greater, followed in the days and weeks after the main quake.

The Impact – Following the 2011 Japanese Fukushima nuclear disaster, authorities shut down the nation’s 54 nuclear power plants. The Tokyo Electric Power CompanyFukushima Daiichi plant remains highly radioactive, with some 160,000 evacuees still living in temporary housing, and some land will be unfarmable for centuries. The  difficult cleanup job will take 40 or more years, and cost many tens of billions of dollars, with total economic costs estimated at $250–$500 billion