THE WILL TO SEE shadows the old-time war reporter, philosopher and writer, 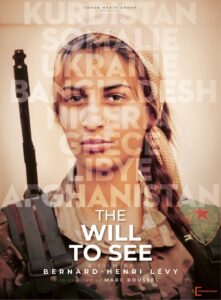 Bernard-Henri Lévy as he accept a dangerous and essential assignment, in the pandemic year 2020, from a consortium of newspapers that includes Paris Match,

La Reppublica, The Wall Street Journal, to bear witness and report from hotspots around the world disrupted by war with the most challenging geopolitical disasters. From the trenches in Donbas, Ukraine and the resistance in the Panjshir Valley fighting the Taliban to the Kurdish fighters combating ISIS, THE WILL TO SEE is an unflinching look at the world’s most unreachable

war zones and urgent humanitarian crises and has one message: pay attention and care for common humanity. Co-director Bernard-Henri Lévy (Peshmerga, The Oath of Tobruk) joins us to reflect on our collective human history of warfare and cruelty, usually visited upon the most vulnerable amongst us, as well as the state of a world being torn apart by war and violence that is seemingly unable or willing to see it.

For updates and screenings go to: the-will-to-see

About the filmmaker – Bernard-Henri Lévy is a French philosopher, filmmaker, and the author of over 45 books. In addition to his books, he directed five documentary movies among which: Bosna! (filmed in 1993-1994, during the siege of Sarajevo), The Oath of Tobruk (his diary on the battlefield of the Libyan revolution and his documented efforts to convince Hillary Clinton, Barack Obama, Nicolas Sarkozy and David Cameron to intervene in the 2011 Libyan war), Peshmerga (a road-movie, filmed between July and November 2015, along the 1,000 kilometer frontline separating ISIS and the Kurds) and The Battle of Mosul (during the 2015-2016 fierce combat to liberate the so-called Caliphate’s capital, Lévy was embedded with the Kurds and, then, with the Iraqi Golden Division). Three of these films were Official Selections of the Cannes Film Festival. Lévy was one of the founders of the “New Philosophers” movement. A committed intellectual, he is known for his opposition to authoritarianism in its manifold forms and as a proponent of the “duty to intervene.”

About the filmmaker – A French photographer, director and journalist, Marc Roussel is also the founder of two film production companies and Orizon, a collective of photographers. Marc has directed many reporting features for television since the 1990s and created and produced numerous photo exhibitions and publications. He first met Bernard-Henri Lévy in 2001, following a series of articles by Lévy for Le Monde on forgotten wars. Since then, they have often covered war zones together such as in Libya, Syria, Iraq, Ukraine and Afghanistan.

“Again and again, we are taken in The Will to See to places where regular reporters never venture, and certainly not filmgoers.” – Gerald Peary, Arts Fuse

“Although Lévy’s impassioned dispatches occasionally exhibit a weakness for purple prose, his mission serves a sobering reminder of those left behind as well as the failure to heed warning signs…” – Michael Rechtshaffen, Los Angeles Times

“An urgent film which spans a number of countries and types of conflict.” – Rob Aldam, Backseat Mafia