In THERE THERE acclaimed filmmaker Andrew Bujalski (Support the Girls, 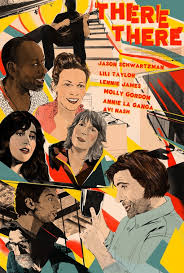 Computer Chess) explores the precarious nature of human connection in a round robin of emotional two-character vignettes in which seven people reach out and bond momentarily, setting the scene for the next encounter. A pair of new lovers, an alcoholic and her AA sponsor, a teacher and a parent, a lawyer and his client, and more move from scene to scene, revealing intimate details as they forge connections. Via a groundbreaking shooting process, Bujalski plays with ideas of isolation

and perception by filming each actor individually in separate locations, only joining them to their partner’s performance in the edit. An extraordinary cast including Jason Schwartzman, Lennie James, Lili Taylor and Molly Gordon sensitively captures the humor and heartbreaking fragility of life and love in the 2020s. Director Andrew

Bujalski (Beeswax, Support the Girls, Results, Funny Ha Ha) stops by for a conversation on how the daunting challenge of making a film in the age of COVID that mirrored the unstable zeitgeist of a film about seven people rattling through life trying to re-connect with a recognizable humanity.

For more go to: magpictures.com/therethere

About the filmmaker – Andrew Bujalski, born in Boston in 1977, is the son of an artist-turned-businesswoman, Sheila Dubman, and a businessman, Edmund Bujalski. Andrew studied film at Harvard’s Department of Visual and Environmental Studies, where the Belgian filmmaker Chantal Akerman was his thesis advisor. He shot his first feature, Funny Ha Ha, in 2002, and followed it with Mutual Appreciation in 2003 – though neither film received theatrical distribution until 2005 and 2006, respectively. Bujalski wrote both screenplays, and appears as an actor, playing a major role in both films. In 2006, he appeared as an actor and contributed to the screenplay of the Joe Swanberg film Hannah Takes the Stairs. Beeswax and Computer Chess, Bujalski’s third and fourth independent films, were filmed in Austin, where the director lives now. Beeswax was released in the summer of 2009. While making Beeswax, Bujalski wrote a screenplay adaptation of Benjamin Kunkel’s 2005 novel Indecision for Paramount Pictures. His fourth feature Computer Chess, a period film set at a computer programming tournament in 1980, premiered at the Sundance Film Festival 2013 and won the Alfred Sloan Feature Film Prize. It is his first feature edited digitally and it is the only feature film shot almost exclusively with original Sony 1968 AVC-3260 B&W video cameras. In 2015 he directed and wrote the screenplay for Results (2015) and the award-winning Support the Girls (2019) starring Regina Hall.