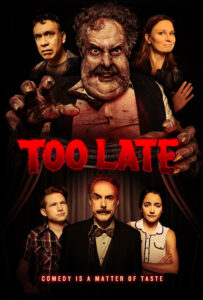 indie comedy scene features Violet Fields who works a thankless job as the assistant to Bob Devore, famed comedian and host of the live variety show, Too Late. But what only Violet knows is that Bob is a monster both literally and figuratively. Resigned to her fate, Violet is caught by surprise when she meets aspiring comedian Jimmy Rhodes and sparks fly. But as her feelings for Jimmy grow and Bob starts to doubt her loyalty, she and Jimmy could end up as Bob’s next meal. TOO LATE is the debut feature film from director D.W. Thomas and writer Tom Becker. It stars Alyssa

For news and screenings go to: toolatethemovie.com

Gravitas Ventures will release TOO LATE in select theaters and on digital platforms including iTunes, Google Play, Fandango Now and all major cable/satellite platforms on June 25.

About the filmmaker – D.W. Thomas is a feature film director. She had her start editing films for indie production company, Cineville International known for Mi Vida Loca, Gas Food Lodging and Swimming with Sharks. She has produced and edited behind-the-scenes segments for studios including NBC, Disney, Marvel, and Pixar. Her feature film directorial debut Too Late will be premiering June 25th in theaters and on demand. For more go to: firemarkmedia.com

“’Too Late’ can be taken as a show business metaphor. Throughout we see that only the strong and ruthless survive and succeed, with Devore himself being a symbol of star power gobbling up the competition.” – Bob Bloom Journal and Courier (Lafayette, IN)

“Like the stand-ups it spotlights, it knows how to tell a joke, and how to get off the stage before you’re tired of it.” – Stephen Whitty, Film Racket

“A lovely and fun horror comedy that plays it safe when balancing the genres. An indie gem.” – Federico Furzan, Movie-Blogger.com