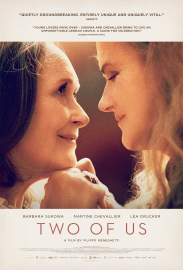 hidden their deep and passionate love for many decades. From the point of view of those surrounding them, including Madeleine’s meddling daughter (Léa Drucker), they are simply two neighbors sharing a hallway during their sunset years. In reality, this landing is a bridge between two

worlds: one belonging to a widowed, doting grandmother, the other to a free-spirited woman who longs to spend her life with the person she loves. Clandestinely, Nina and Madeleine share a tender life, moving freely between their apartments until an unexpected event closes the portal. But their secret cannot remain hidden if they are to stay together – and their unconditional love is put to the test. Director Filippo Meneghetti joins us for a conversation on this beautifully rendered film that’s a loving tribute to passion, fidelity and a fierce determination to hold on to the people who matter most.

For news and updates go to: twoofusfilm.com

Watch the film at : twoofusfilm.com/watch-at-home

About the filmmaker – Director, screenwriter Filippo Meneghetti – Originally from Padova, Italy, Filippo’s earliest work experience was on New York’s indie film circuit. After film school and an Anthropology degree in Rome, he co-wrote the feature Imago Mortis (2009). He worked as a first assistant for several years before starting to direct his own short films, Undici (2011, codirected by Piero Tomaselli) and L’intruso (2012), which screened and garnered prizes at festivals in Italy and abroad. In 2018, Filippo moved to France where he made his next short, The Beast, which screened in competition at SXSW 2019 and can now be seen at international festivals. Two Of Us is Filippo’s first feature.

“The film’s brevity means some ideas are under-developed. But what we’re left with is a sublime and sublimely simple portrait of a love that’s been lived in and the devotion it will take to ensure that endures.” – Roger Moore Movie Nation

“Two of Us is absolutely beautiful … and [it’s] refreshing to see two older women as sexual beings in all their yearning.” – Sara Clements, AwardsWatch

“This is a smart movie that starts from a relatively simple yet captivating premise and then steadily gains in complexity as it develops.” – David Rooney, Hollywood Reporter

“Perhaps most importantly, what Two of Us captures is something which so much of mainstream media would rather ignore: the desire, passion and sexuality of people above a certain age.” – Becky Kukla, Film Inquiry