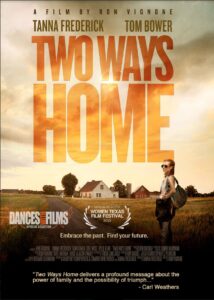 compassionately follows Kathy (Tanna Frederick), a woman newly diagnosed with bipolar disorder who is released from prison on good behavior and returns to her country home in Iowa to reconnect with her estranged 12-year-old daughter (Rylie Behr) and her cantankerous elderly grandfather (Tom Bower). Her return home is turbulent and a rough, unwelcome transition in which Kathy must come to terms with her diagnosis and its implications on her identity, while also realizing that her family was happier

when she was gone. As she struggles to maintain balance with her condition, complications with her daughter’s well-being and her grandfather’s health test her

sense of self-worth to the limit. TWO WAYS HOME masterfully showcases Iowa’s small town beauty and sympathetically highlights the importance of mental wellness and self-discovery. Director Ron Vignone and actor / producer Tanna Frederick join us to talk about their collaboration in the making of a film that features a person dealing with a mental illness without making it the only thing we should care about in TWO WAYS HOME.

For news, screenings and updates go to: twowayshomemovie.com

Tanna Frederick is an Actress, Producer, and Environmental Activist. She has starred in six feature films with film iconoclast Henry Jaglom, and has won numerous Best Actress awards on the festival circuit. Method Fest named her “One to Watch”; she has received the CineCause Award, the University of Iowa’s Distinguished Alumni Award, and the Los Angeles Women’s Theatre Festival’s Maverick Award. Tanna alongside director Randal Kleiser (Grease) created and launched DEFROST, a revolutionary virtual reality experience, premiering at Sundance and Cannes. She is the founder of ProjectSaveOurSurf.org hosting monthly beach cleanups and a camp, which has reached thousands of displaced youth in Southern California and Mexico, educating them on environmental issues in our oceans.

Ron Vignone is an award-winning director whose filmmaking revolves around issues that are deeply personal and important in his life. Two Ways Home, his latest effort, is an edgy slice of Americana about a woman living with bipolar condition who aims to reunite with her estranged teenage daughter in their sleepy Iowa hometown. “Taking the shame out of our conditions” was a theme that drew Ron to making Two Ways Home. A graduate of the University of Southern California, Vignone’s work as a filmmaker has focused on protagonists who embark on a physical journey while struggling with their deeply conflicted interiors. Ron’s inspirations come from compromising situations while traveling, his family, great literature, and strong Italian coffee.

“TWO WAYS HOME… makes for a thoughtful, warm journey back to a place a lot of Americans will recognize, even those of us who moved away.” – Roger Moore, Movie Nation

“With star Tanna Frederick producing, Two Ways Home was directed by Ron Vignone and filmed in Iowa. They found the right mix: one false move in any direction and the tone could have gone off the rails into hopeless Hallmark-channel schmaltz, or incomprehensible chaos. Amazingly, Frederick and Vignone masterfully created a moving film that pulls no punches while compassionately exploring life with mental illness.” – FIlm Threat

“One actress and film that stood out to us is Tanna Frederick from Two Ways Home. Tanna Frederick is captivating, raw, and lights up the screen. Frederick’s performance also provokes intense emotion from the audience. You find yourself rooting for her character, Kathy, who is fighting hard to put her family back together. Tanna Frederick is an incredibly gifted actress.” – GEMMA

“TWH will make a significant difference in people’s lives and is a powerful tool to further families’ understanding and education about bi-polar illness.” – Yin Simpson, National Alliance on Mental Illness (Minneapolis, MN chapter)