Filmed over the summer festival season, UNDERPLAYED presents a 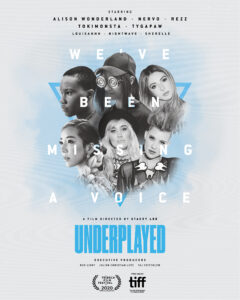 portrait of the current status of the gender, ethnic, and sexual equality issues through the lens of the female pioneers, next-generation artists, and industry leaders who are championing the change, and inspiring a more diverse pool of role models for future generations. The impetus for the UNDERPLAYED came to light during the 2018 Bud Light House Party Tour, when Bud Light Canada sat down with artists from diverse backgrounds and genres to learn about the evolution of their careers, and their unique experiences in recording, touring, and performing. Key conversations with female DJs exposed a striking gender inequality in the space, and further research substantiated their experiences. Electronic music 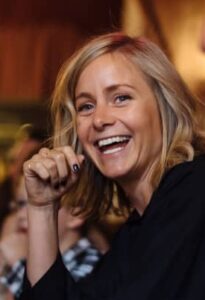 was born from the ideals of diversity, community, and inclusivity; yet in 2019 only 7% of Billboard’s Top 100 DJs were women. They make up less than 3% of production and technical roles in the music industry. For women of color, it’s less than 0.3%.An official selection of both the 2020 Tribeca Film Festival and Toronto International Film Festival, UNDERPLAYED features NERVO, Rezz, TOKiMONSTA, Alison Wonderland, and Tygapaw. Director Stacey Lee stops by to talk about just how grotesquely under represented women are in a music genre that has made truckloads of music from a female fan base that is ready and willing to support a rise wave of women taking their place behind soundboards and laptops all around the world.

For news, updates and screenings go to: underplayedthefilm.com

UNDERPLAYED will have its global on demand release on Monday, March 8. In the U.S. and abroad, the film will be released on Amazon Prime Video.

Director’s Statement – “When the pioneering godmothers of electronic music first began tinkering away in their scientific labs back in the 50s and 60s, they could never have imagined their little back room experiments would make way for a blossoming 8 billion dollar global industry today. Nor could they have foreseen how drastically its very creative, egalitarian roots would transmute from an open experimental playing field, to an industry dominated by a one-dimensional male point of view. This is a universal theme, and sadly one that I can personally relate to as a “female” filmmaker in a heavily male field. I empathize and understand the frustration of having to fight harder to be considered for jobs “because there aren’t as many good female directors,” to turn a deaf ear to the belief that women “can’t be technical”, that we don’t deserve equal pay, or in my instance, hiding my pregnancy beneath an oversized blazer so I wouldn’t jeopardize my chances of securing jobs. When I learned about the shared plight of the women in electronic music, I saw a necessity to tell a story that speaks to the deeply personal and very human impact of this global issue. That transcends the music space, and speaks to the collective experience of so many working women today from film to politics and beyond.” Ultimately Underplayed raises the question; do we want our ears to be controlled by logarithms, safe bets and preconceived formulas…or become a space that is radically free to sound as rich, diverse and ever- changing as the world around us? The hope is for Underplayed to stimulate the conversation needed to break down the systematic bias’ and bring electronic music back to its open, diverse and fiercely experimental roots. To remind us that equality isn’t about one side defeating the other, but by all sides coming together for the greater good. Because the more we can lift each other up, the more we all have to gain.” – Stacey Lee

About the filmmaker – Director Stacey Lee was born in New Zealand, Stacey Lee’s work focuses on humanity, music, and movement. Her documentary short Live Fast Draw Yung premiered at Tribeca Film Festival in 2015, winning awards in Atlanta and Tacoma. She was recently shortlisted for the Cannes Young Directors Award and selected as part of the DGA/AICP Diversity Showcase. Underplayed is her feature debut.

“By its conclusion, you will want to check out everyone’s playlists, spin some tunes and get a groove on. May they never be underplayed again.” – Christopher Llewellyn Reed, Hammer to Nail

“Stacey Lee’s film will have one pumping your fist in solidarity with these insanely talented women while simultaneously bopping your head to their infectious beats.” – Courtney Small, That Shelf

“In an industry that has historically failed to make space for female artists, creating safe spaces where women can feel seen and heard is crucial. – Natalia Winkelman, The Daily Beast

“Directed by Stacey Lee, the in-depth Underplayed looks at how women have risen to take up space in the male-dominated music production world.” – Carolyn Mauricette, View From The Dark