Imprisoned by the Soviets. Orphaned by the Holocaust. Elected Prime 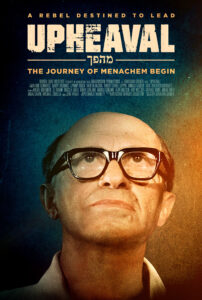 Minister. Crowned peacemaker by the Nobel Prize Committee. Disgraced by the Lebanon War. Menachem Begin was a pillar of the State of Israel and a tireless fighter for the Jewish people. He was, at the same time, a controversial leader. Whether he was challenging the British, founding the Likud political party or fighting to end bigotry against Middle Eastern and African Jews in Israeli society, his dedication to his country and his people was boundless. Still, that unwavering commitment could bear untoward consequences. In 1948, as Israel fought for its life as a nation, his role in the tragic Altalena Affair that ended in the deaths of 19 Jews, and at Deir Yassin, where  more than 100 Palestinians died, including women and children, haunted him until  the day he died. As Prime Minister of Israel, he made an historic peace deal with Egypt, and he also gave the go-ahead to bomb Saddam Hussein’s

Osirak nuclear reactor. His life is a nuanced and complicated canvas that tells the story of key events and currents in the history of modern Israel and its relationship to its Middle East neighbors. The recent ground-breaking peace agreements between Israel, the United Arab Emirates, Bahrain, Sudan and Morocco make this a propitious time to look back at Begin’s achievements and consider them in a new light. Director Jonathan Gruber stops by for a conversation on one of the most consequential patriots and political leaders in the Israeli history, and a man who was also provided a moral compass for the people he led.

For news and updates go to: upheavalfilm.com

Director’s Statement   When I was asked to direct UPHEAVAL, I immediately knew that the complexity of Israeli Prime Minister Menachem Begin’s story should be underscored by the need to strike a balance among vastly different political and ideological perspectives. As we see in society today, the gray is often erased in favor of more partisan and oversimplified stances, when, as I see it, there are untold nuances to leadership from which we can learn deeper truths and lessons. This film is a study in the gray. Begin fiercely advocated for Arab-Israeli citizenship but was deemed a radical right-winger for his role infighting for Israel’s independence, as well as expanding Jewish settlements in theWest Bank.He elevated North African and Middle Eastern Jews in Israeli society, helping to counter the discrimination they were facing, and heal so oversaw the rescue of Ethiopian Jews and Vietnamese refugees, welcoming them as immigrants. He sought and achieved peace with Egypt — but also led a tragic and unsuccessful war in Lebanon. Directing the first English-language feature documentary on Prime Minister Begin has been an eye-opening exploration of the heart and mind of one of the most iconic leaders of the 20th century. From his Eastern European roots to becoming an advocate and politician on the world stage, Begin’s humility and modesty belie his courage and resilience. For better or for worse, he stood up for his ideals, and, ultimately, he held himself accountable to them. World leaders today would be wise to learn from someone who did not enrich himself through his position but fought for his values and beliefs on behalf of the people who elected him.  – Jonathan Gruber