UTAMA takes us to an arid Bolivian highlands where an elderly Quechua couple, 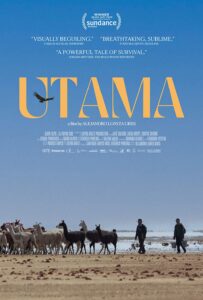 Virginio and Sisa, have been living a tranquil life for years. While Virginio takes their small herd of llamas out to graze, s Sisa keeps house and walks for miles with the other local women to fetch precious water. When an uncommonly long drought threatens everything they know, the couple must decide whether to stay and maintain their traditional way of life or admit defeat and move in with family members in the city. Virginio and Sisa’s dilemma is precipitated by the arrival of their grandson Clever, who comes to visit with news. The three of them must face, each in their own way, the effects of a changing environment, the importance of tradition, 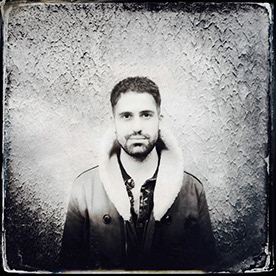 and the meaning of life itself. This visually jaw-dropping debut feature by photographer-turned-filmmaker Alejandro Loayza Grisi is lensed by award-winning cinematographer Barbara Alvarez (Lucretia Martel’s The Headless Woman) and won the Grand Jury Prize (World Cinema

Dramatic) at the Sundance Film Festival. Director Alejandro Loayza Grisi joins us to talk about identifying the non-professional actors to play Virginio and Sisa, working with the indigenous villagers and the striking right balance of look, pace and tone for this stark personal tale that also addresses the direct impact that the looming climate catastrophe will have on the poorest people on the planet.

For more info and screenings go to: kinomarquee.com/UTAMA

About the filmmaker – Bolivian filmmakerAlejandro Loayza Grisi (1985) began his artistic career in still photography andthen enters the world of cinema through cinematography.As a director of photography he worked in documentary series Planeta Bolivia, and many short films such as Aicha, Dochera and Polvo. Attracted by the stories that can be told through the image in motion, he ventured into script and direction with his first feature film, Utama.

“Beautifully realized feature debut. Shot in artfully composed and vibrantly colored widescreen by DP Barbara Alvarez, it resembles a cross between a minimalist Sergio Leone western and a series of photos by Sebastião Salgado. The story at the heart of the film… is more than just a coffee-table-book view of indigenous culture; it’s a powerful and cautionary tale of survival in a dying world.” – Jordan Mintzer, The Hollywood Reporter

“Meditative and deeply romantic. Rarely has the [climate] crisis been addressed as organically – or with quite so many llamas.”  – Marya E. Gates, RogerEbert.com

“Through the love story at the heart of this visually arresting feature debut, UTAMA offers the audience a relatable connection with a way of life that is on the verge of extinction. The risk of any film taking the photogenic simplicity of peasant lifestyles as its subject is that it slips into ethnographic romanticisation. UTAMA avoids this by foregrounding a harshness and desperation that balances the calendar-photo appeal of the llamas.” – Wendy Ide, Screen International