Set after the collapse of the Earth’s ecosystem, VESPER follows the 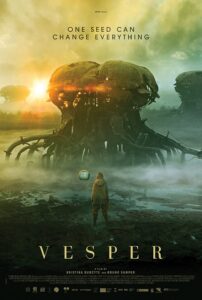 titular headstrong 13-year-old girl (Raffiella Chapman), who uses her survival skills to subsist in the remnants of a strange and dangerous world with her ailing father, Darius (Richard Brake). When Vesper finds a mysterious woman, Camellia (Rosy McEwen), alone and disoriented after an aerial crash, she agrees to help find her missing companion in exchange for safe passage to the Citadel, – the dark central hub where oligarchs live in comfort thanks to state-of-the-art biotechnology. Vesper soon 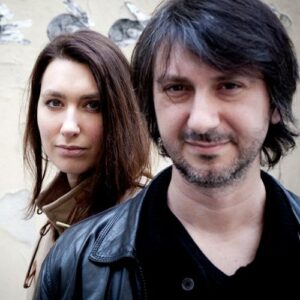 discovers that her brutal neighbor, Jonas (Eddie Marsan), is searching for Camellia, who is harboring a secret that could change all of their lives forever. Forced into a dangerous adventure, Vesper must rely on her wits and

bio-hacking abilities to unlock the key to an alternate future.  Co-directors Kristina Buozyte and Bruno Samper join us to talk about their beautifully rendered “future” world that seamlessly blends high-tech with ancient / indigenous lo-tech ingenuity, how they found perfectly cast Raffiella Chapman to play Vesper and how their work points to a radicalized vision for our collective future.

For info and updates go to: vespermovie.com

Where to watch at: vespermovie.com/watch-at-home

About the filmmaker(s) – Kristina Buozyte and Bruno Samper started their collaboration in 2007, co-writing Kristina’s first film, the award-winning THE COLLECTRESS. The movie won Best Feature Film at the 2008 Lithuania Silver Crane Awards, Best Director at the Russian Kinoshock Festival, and the film was selected for more than 30 film festivals, including Karlovy Vary, Pusan, Valencia, Manheim, Cottbus, and Cairo, among others. After their recognition, the creators deepened their partnership and made a second successful feature film, VANISHING WAVES (2012), which won 24 prizes in different festivals, including the 2012 Méliès d’Or Award, Best European Fantastic Film, 4 prizes in Fantastic Fest (Austin USA), and a Special Mention at the 47th Karlovy Vary Film Festival, among others. VANISHING WAVES was widely distributed both in Europe and the U.S. While developing their third feature, VESPER, Kristina and Bruno co-directed and co-produced a short segment, “K is for Knell” for the American horror anthology “ABC’S OF DEATHS 2.”

“Something wholly unique — at once modern and timeless, nostalgic for a genre only just created, already pining for images freshly cast up on screen.” – Ben Croll, TheWrap

“Many of the beats and visuals of the movie echo cinema past. But Buožytė and Samper still manage to put a very unique stamp on proceedings to create a consistently thought-provoking and immersive affair.” – Laurence Boyce, Cineuropa

“Their world-building is astounding. Through a mixture of VFX and practical effects, they have crafted a world that feels as ancient as it does futuristic.” – Marya E. Gates, The Playlist

“Vesper is one of best films from Fantasia 2022. An exceptional look at humanity’s survival on a dying planet where capitalism still has a firm grip. It shows greed as a prison, and we’ll all suffer from it.” – Sara Clements, Pay or Wait

“A story which is, ultimately, about learning to think differently, to change the way that we direct our attention and resources in order to open up the possibility of renewal.” – Jennie Kermode, Eye for Film