Before Citizen Kane and The War of the Worlds, leading Broadway actress Rose 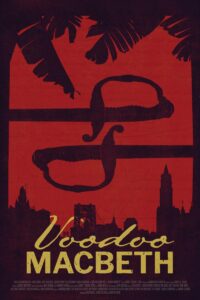 McClendon and producer John Houseman convince a gifted but untested 20-year-old Orson Welles to direct Shakespeare’s Macbeth with an all-Black cast in Harlem. Reimagined in a Haitian setting, this revolutionary 1936 production, which came to be known as “Voodoo Macbeth,” would change the world forever, but the road to opening

night proves to be a difficult one. Orson and Rose – who is to play Lady Macbeth – clash over everything from scene blocking to crew hires, while Houseman contends with a congressman hell-bent on shutting down what he deems “communist propaganda.” Welles and McClendon must overcome political pressure, personal demons, and protests to realize their groundbreaking vision.

Fresh of an award-winning film festival run Voodoo MacBeth is being released for a theatrical run through Lightyear Entertainment. Co-producer Jason Phillips, lead actors Inger Tudor and Jewell Wilson Bridges join us to talk about the story

behind the story making a film in which ten directors, six  producers and eight writers seamlessly collaborated, how the USC School of Cinematic Arts and USC Originals factor into the making of the film, re-discovering this little known chapter in the life of a filmmaking giant Orson Wells, and the importance of publicly support funding for the arts, including the Federal Theatre Project and its support for Harlem’s Negro Theatre Unit.

For more go to: voodoomacbethfilm.com

About the filmmaker – Jewell Wilson Bridges is a fresh face in LA pursuing television and film roles, after working as a dramatic and musical theater actor in New York. He won Best Actor in the IndieX Film Fest for his short OUTSIDE THE ANGEL CITY. Recent theater credits include: Geoffrey in LION IN WINTER (St. Louis Rep), Perchik in FIDDLER ON THE ROOF (Pioneer Theater), and historical figure Carlo Gesualdo in DEATH FOR FIVE VOICES (Prospect Theater Co). He is a proud Kentucky native and graduate of Baldwin Wallace University.

“A solid dramatization of the theatre scene in the 1930s. It is worth viewing for anyone interested in one of the many seeds that yielded the Civil Rights Movement in America.” – Alan Ng, Film Threat

“The idea behind this film’s production is almost as daring as Orson Welles’ original 1935 “Voodoo Macbeth” adaptation!” – Diane Carson, AWFJ Women on Film

“It’s attractively filmed and, mostly, solidly performed, taking some historical liberties but otherwise getting the gist of the tale out in the open for new generations to discover and appreciate” – William Bibbiani, TheWrap

“This is a wholly professional endeavor and it is engaging all the way through.” – Andy Klein, FilmWeek (KPCC – NPR Los Angeles)