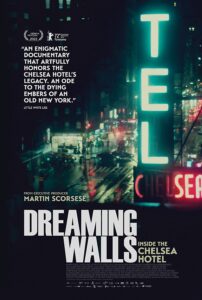 DREAMING WALLS takes us inside the legendary Chelsea Hotel, an icon of 1960s counterculture and a haven for famous  artists and intellectuals including Patti Smith, Janis Joplin and the superstars of Warhol’s Factory. The iconic structure is undergoing an extensive renovation. Soon it will  reopen to the public as one of New York’s most fashionable luxury hotels. Dozens of long-term residents, most in their later years, have lived  amidst the scaffolding and constant construction for close to a decade. Against this chaotic backdrop, DREAMING WALLS: INSIDE THE CHELSEA HOTEL takes us through

the hotel’s storied halls, exploring its living body and the bohemian origins that contributed to its mythical stature. Its residents and the

walls themselves now face a turning point in their common history. Co-directors Amélie van Elmbt and Maya Duverdier stop by to talk about their distinctive, dreamy and beautifully rendered look into the history, architecture, ambiance and denizens that have imbued the Chelsea with its power and glory.

For updates and screening go to: magpictures.com/dreamingwalls

To watch at home go to: magpictures.com/dreamingwalls

About the filmmaker – Director AMÉLIE VAN ELMBT – After studying film at the Belgian Film School IAD, Amélie van Elmbt worked as a casting director and assistant director with French director Jacques Doillon. In 2011 she directed and self-produced her first feature, HEADFIRST, which screened in Cannes’ ACID section and won the main award at the New York First Time Festival. There she met Martin Scorsese, who executive produced her second feature, THE ELEPHANT & THE BUTTERFLY (2017), which premiered at the Tribeca Festival and won the Grand Prize at the Heartland International Film Festival. Amélie co-directed DREAMING WALLS with Maya Duverdier and is currently working on a new fiction feature, to be produced by Les films du Fleuve.

About the filmmaker – Director MAYA DUVERDIER – After receiving a bachelor’s in arts in France, Maya Duverdier obtained her Master’s degree in cinema at the Ecole Cantonale d’Art de Lausanne with her documentary JEANNE SANS ARC (2014). Along with her work as a director and writer for narrative and documentary projects, she’s also active within various positions of film, television and advertising production. DREAMING WALLS is Maya’s first feature documentary.

“When the film focuses on paying homage to the legacy of the Chelsea, Dreaming Walls becomes a meditative and hypnotic reverie of a life lived in the shadows of greatness, and a reminder of a time that is now left only to lore and superstition.” – Mark Johnson, Awards Daily

“Theres not much new in this lovingly made impressionistic documentary about New Yorks very well-chronicled Chelsea Hotel, but the place and its tenacious residents still have a pull.” – Jay Weissberg, The Film Verdict

“Aficionados of New York history will devour Dreaming Walls, though it obviously comes with hefty melancholy. There are pieces of beauty interspersed with the wistfulness, though, often manifesting in unexpected ways.” – Dan Schindel, Hyperallergic