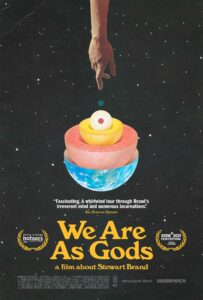 influential member of Ken Kesey’s “The  Merry Pranksters,” and founder of the modern environmental movement. Brand’s approach to his work and life influenced  many, including Steve Jobs, who have gone on to shape our modern world. Now in his 80’s, he looks to leave a legacy for the long-term future with his efforts to resurrect ecosystems through de-extinction. The man who coined the phrase “we are as gods and might as well get good at it” is now under fire from former allies who believe he’s gone

too far, but Brand won’t be easily deterred from a mission he feels is necessary to save the future of the planet. Now in his ninth decade, still committed to long term thinking, he controversially

advocates for a new approach to nuclear power and the bio-reengineering of keystone extinct species. Co-directors David Alvarado  & Jason Sussberg join us to talk about their own paths into the worlds of Stewart Brand, their admiration for his uncanny ability to be at the center of cultural and technological shifts, as well as getting a glimpse into his life away from the spotlight.

For updates and screenings go to: greenwichentertainment.com/we-are-as-gods

For news, updates and screenings go to: weareasgods.film

About the filmmaker – David Alvarado is an award-winning documentary filmmaker with a passion for science, philosophy, and human rights. He is the son of a Mexican immigrant and although he dropped out of high school, his pursuit of filmmaking and his love of science helped him find a passion that changed his life forever. Today, he lives in Brooklyn, NY and works tirelessly to put science back in its rightful place in society. Structure Films is a New York/ San Francisco production company David founded with Jason Sussberg. Together, they directed The Immortalists, Bill Nye: Science Guy, and We Are As Gods.

“A celebration of the most optimistic big thinker of them all, a figure who has been at the forefront of many of the best phenomena, trends, technology and values inculcated in modern culture.”  – Roger Moore, Movie Nation

“Brand emerges as one of the signature players of the technological age.” – Wired

“This is a deep dive into the history and life of a truly fascinating man.” – Rogerebert.com