Set in Oakland, a city with a deep history of social justice movements, WE ARE THE 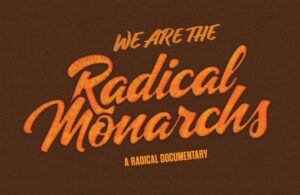 RADICAL MONARCHS documents the Radical Monarchs – an alternative to the Scout movement for girls of color, aged 8-13. Its members earn badges for completing units on social justice including being an LGBTQ ally, the environment, and disability justice. The group was started by two, fierce, queer women of color, Anayvette Martinez and Marilyn Hollinquest as a way to address and center her daughter’s

experience as a young brown girl. Their work is anchored in the belief that adolescent girls of color need dedicated spaces and that the foundation for this innovative work must also be rooted in fierce inter- 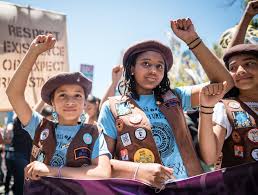 dependent sisterhood, self-love, and hope. WE ARE THE RADICAL MONARCHS follows the first troop of Radical Monarchs for over three years, until they graduate, and documents the Co-founders struggle to respond to the needs

of communities across the US and grow the organization after the viral explosion of interest in the troop’s mission to create and inspire a new generation of social justice activists. Director / Producer Linda Goldstein Knowlton (Somewhere Between, Dream,Girl, Whale Rider, The Shipping News) joins us to talk about the positive role-modeling, the sense of community connection and empowerment that the Radical Monarchs has brought into the lives of these young women of color.

For news and updates go to: wearetheradicalmonarchsmovie.com

We Are the Radical Monarchs airs Monday, July 20 at 9 PM – PBS series POV

About the filmmaker Linda Goldstein Knowlton (Producer/Director) is an Emmy-nominated filmmaker, working in documentary and scripted feature films, as well as television.  In 2016, she Executive Produced the documentary DREAM,GIRL, which premiered at The White House.  The film showcases the stories of inspiring and ambitious female entrepreneurs. Goldstein Knowlton directed and produced one of the six, Emmy-nominated documentaries for the PBS MAKERS: Women Who Make America series.  The film, WOMEN AND HOLLYWOOD, aired in October, 2014 and includes interviews with  Jane Fonda, Shonda Rhimes, Lena Dunham, Ava Duvernay, Glenn Close, Julia Louis-Dreyfus, Alfre Woodard, Hunger Games producer Nina Jacobson, among many other notable women. Prior to that, she produced CODE BLACK, Best Documentary winner at LA Film Festival and the Hamptons International Film Festival, and the basis for the CBS one-hour drama of the same name. Previously she directed and produced SOMEWHERE BETWEEN, which won the Sundance Channel Audience Award at the Hot Docs Film Festival, and was released theatrically in over 80 cities across the US. For her directorial debut, she co-directed THE WORLD ACCORDING TO SESAME STREET, which debuted at the 2006 Sundance Film Festival in competition and aired nationally on PBS. Linda started her career producing feature films, including the award-winning WHALE RIDER and THE SHIPPING NEWS.