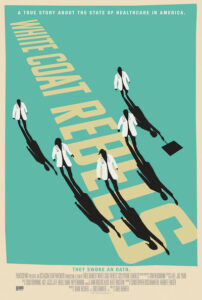 wake-up call into the corrupting influence of Big Pharma on the medical profession and the courageous young doctors and students fighting back to improve inequities in healthcare. The film revolves around the direct actions of health professionals seeking to reform a broken health care system. Many of the film

participants, including UCLA medical student Neda Ashtari,  belong to Universities Allied for Essential Medicine (UAEM). UAEM is a student-driven organization working to improve access to and affordability of life-saving medicines, especially those researched and

For more go to: participant.com/white-coat-rebels-now

About the filmmaker – A native Californian, Director, Producer and Writer Greg Barker earned a BA in economics from George Washington University and a MSC in International Relations from The London School of Economics. He lived in London for most of his adult life, and became a freelance journalist and war correspondent, working with organizations such as CNN, BBC and Reuters. He turned to filmmaking in 1998, and made a string of international films for the flagship PBStelevision seriesFrontline. Barker spent seven years researching the Rwandan genocide, which resulted in the feature-length Frontline documentary Ghosts of Rwanda, which won numerous awards and established his reputation. In 1998, Barker began working closely with the feature documentary producers John Battsek  of Passion Pictures and Julie Goldman of Motto Pictures. Together they have made Sergio, Koran By Heart, Manhunt, Homegrown: The Counter-Terror Dilemma, and The Final Year all of which Barker directed for HBO Documentary Films. He directed his first narrative feature Sergio (2020) for Netflix. It premieres at Sundance Film Festival 2020.

About the filmmaker – Producer and physician Dr. Harriet Fraser, originally from the UK and now based in Los Angeles, is a classically trained soprano equally happy on stage or in the studio. She is an excellent sight-reader. Her fine, rich soprano voice combined with her innate musicality, enables her to perform music ranging from baroque to contemporary. She is the first choice for composers and conductors who demand accurate interpretation and reliability whether of a familiar piece from the repertory or a complex modern composition.

Universities Allied for Essential Medicines (UAEM) is a non-profit organization rooted in a movement of university students. UAEM seeks to: 1) Promote access to medicines for people in developing countries by changing norms and practices around university patenting and licensing; 2) Ensure that university medical research meets the needs of the majority of the world’s population; 3) Empower students to respond to the access and innovation crises. Since its founding in 2001, UAEM has grown into an international network of students in medicine, law, public health and related fields with chapters on nearly 100 university campuses in 20 countries. Find out more @ uaem.org