The Atlantic’s first feature documentary, WHITE NOISE, is the definitive inside story of the 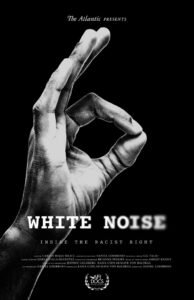 movement that has come to be known as the alt-right. With unprecedented access, WHITE NOISE tracks the rise of far-right nationalism by focusing on the lives of three of its main proponents: Mike Cernovich, a conspiracy theorist and sex blogger turned media entrepreneur; Lauren Southern, an anti-feminist, anti-immigration YouTube star; and Richard Spencer, a white-power ideologue. Directed and shot by Daniel Lombroso in his directorial debut, this film takes the viewer into the terrifying heart of the movement—explosive protests, riotous parties, and the rooms where populist and racist ideologies are refined, weaponized, and injected into the mainstream. Just as the alt-right comes to prominence, infighting

tears the movement apart. Spencer and Cernovich clash over the role of white nationalism in conservative politics. Southern struggles to reconcile her leadership role with the sexism and misogyny of her peers. Lawsuits mount and internecine fights erupt, but even as the alt-right fractures, its once-marginalized ideas gain a foothold in mainstream discourse; in Republican politics; in the establishment right-wing press, especially Fox News—and on the world’s biggest social-media platforms. Director Daniel Lombroso joins us to talk about his immersive experience into the world of the white nationalist movement, an ideology  that echos and trades on the tropes of fascism.

For news, updates and screenings go to: theatlantic.com/white-noise-movie

WHITE NOISE releases on October 21 in the U.S. on iTunes, Amazon Prime Video, and Google Play.

About the filmmaker – Daniel Lombroso is a freelance director and journalist. For five years, he was a staff producer at The Atlantic, where he directed shorts exploring Russian espionage, the Israeli settlement movement, far-right Christian media, and more. Lombroso graduated from McGill University with a degree in political science and lives in New York City.  His debut feature film, WHITE NOISE, based on his four years reporting inside the alt-right, premiered at AFI DOCS in June 2020 to critical acclaim. It is the first-ever feature film by The Atlantic. For more go to: daniellombroso.com

“Lombroso did his homework, embedding himself with these people for several years, so that he won their trust and became privy to their private lives. “White Noise” is a deadly serious movie, but it is also, in a certain way, a funny one, because it captures the comedy of how much trouble even the influencers of hate now have squaring their lives with their belief systems.  It takes reality to create characters as rivetingly contemptible as these.” – Owen Gleiberman, Variety

“There have been several documentaries made about the ideological conditions that laid the ground for the Trump era, but White Noise may be the most illuminating.” – Stephen Silver, Splice Today

“Lombroso’s strategy is patient, and ruthless. He listens to these racists, spending long periods with them to better understand their lifestyles. We slowly start to see that they all kind of hate and resent each other; these fissures are at the heart of this movement’s moral and intellectual rot.” – Alan Zilberman, Brightest Young Things

“Director Daniel Lombroso takes a very clear-eyed approach to the subject, utilizing unprecedented access to show the movement for what it is – an effort to launch a full-on culture war, driven by people whose anger and media savvy is matched by their opportunism. Despite refraining from overt commentary most of the time, the last couple minutes of White Noise poignantly pull together the results of recent alt-right messaging.” – Mike McGranaghan, The Aisle Seat