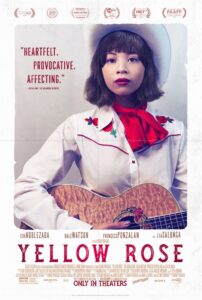 Saigon alum and Tony Award winner Lea Salonga. The film follows Rose Garcia, a 17-year-old Filipina American in Texas. When her mom is arrested by Immigration and Customs Enforcement, Rose undertakes a musical journey while facing deportation back to the Philippines. Inspired by the music of country musicians like Patsy Cline, Loretta Lynn, and Willie

Nelson, the original composition accompanied by Noblezada’s captivating voice becomes the soundtrack of Rose’s wanderings akin to American westerns. YELLOW ROSE Director Diane Paragas joins us to talk about her warm-hearted tale of a young woman’s determination to fight back against the cruelty of a heartless immigration system while pursuing her own version of the American Dream deep in the heart of Texas with Austin’s music icon, Dale Watson at her side.

For news, screenings and updates go to: yellowrosefilm.com

About the filmmaker – Diane Paragas is an award-winning director, editor, cinematographer and producer of commercials, narrative features and documentaries. IN 2012, Paragas co-directed Brooklyn Boheme, a feature length documentary about an African American arts movement, with writer and critic Nelson George.  The film featuring Spike Lee, Chris Rock and Rosie Perez to name a few. The film was acquired by Showtime and won a Black Reel Award for Best Documentary. In 2019, Paragas wrote and directed her debut narrative feature, Yellow Rose, about an undocumented Filipino-American teen pursuing a dream to become a country music singer. The film won over a dozen Grand Jury Prizes during its festival run and will be released by Sony Pictures in 2020. She is also in pre-production for a bold feature documentary about a wrongfully convicted undocumented immigrant called “The Three Lives of David Wong” that uses puppetry to tell its story. The film was is supported by The Sundance Institute,  The Bertha Foundation Grant and CAAM. Ms Paragas is a 2020 recipient of the prestigious Creative Capital Award  and was named as A100’s Most Impactful Asians of 2020 alongside directors Bong Joon Ho, Taika Waititi and Lulu Wang.

“The film beautifully captures the struggles of a young woman to find her voice and a sense of belonging in an often hostile world as it celebrates the joy of making music and its power to provide hope.” – Loren King, AWFJ Women on Film

“An affecting portrayal of a young woman finding her footing against all odds, and claiming her home in a nation that makes it unduly challenging.” – Katie Walsh, Tribune News Service

“The lean screenplay and [Diane] Paragas’ focused creative vision makes for a singular directorial feature debut that feels like nothing else happening in film right now.” – Beth Sullivan, Austin Chronicle