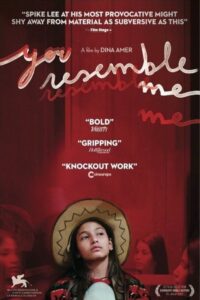 experienced by two Muslim sisters living, figuratively and literally on the outskirts of Paris. Who was Hasna Aït Boulahcen? After the November 2015 Paris bombings, she was labelled “Europe’s first female suicide bomber.” Journalists swarmed around her story, trying to extract details about the mysterious young woman, Hasna, (Mouna Soualem) who lived on the outskirts of Paris. In this drama, director Dina Amer pieces together Hasna’s story from over 300 hours of interviews, from a little girl protecting her younger sister from an abusive home to a

young woman who finds herself trying her best to survive on the streets. YOU RESEMBLE ME shows what happens when society fails to protect a child, and how discrimination, poverty, and abuse facing young people can allow radicalization to plant

roots and grow, with devastating impact on the wider community. Director Dina Amer joins us to talk about working with a production team that includes Spike Lee, Spike Jonze, Riz Ahmed and Alma Har’el, bringing in Mouna Soualem to play Hasna and balancing the creative tension of recounting Hasna’s punishing story of sexual abuse, homelessness, foster care, and the loss her sister without condoning or rationalizing her egregious choices.

For news go to: the-match-factory.com/you-resemble-me

To watch go to: mubi.com/you-resemble-me

Director’s Statement – You Resemble Me was made to go to the roots of a woman’s trauma. A path that crosses various levels of dissociation, from personal and family to religious and colonial; a kaleidoscope of shattered identities and shattered dreams. Tu me ressembles  is an invitation to rethink our concept of absolute truth; it is a challenge to lift those veils that prevent us from seeing ourselves in others. – Dina Amer

About the filmmaker – Director and journalist,  Dina Amer  worked as an associate producer on the documentary  The Square , the frontline story of the Egyptian revolution, nominated for an Oscar and awarded with an Emmy. Growing up between the United States and Egypt, her commitment has focused on nuanced human stories, made for a wide audience. Before embarking on a film career, Amer was a correspondent for VICE, for example on the series  The Black Market , where she exposed the trafficking of Syrian refugees and investigated the underground economy of illegal tunnels between Egypt and Gaza. Her articles have been featured in The New York Times, CNN and the Huffington Post. Tu me ressembles  is her work before her.

“A gripping and painful story of dislocation and belonging.” – Lovia Gyarkye, Hollywood Reporter

“Amer’s conviction in presenting this story of a splintered woman with the utmost humanity ensures your emotional investment as do the powerhouse performances from Soualem and Grimaudo.” – Hanna Flint, The New Arab

“Former journalist Dina Amer’s You Resemble Me is tour-de-force filmmaking that defies conventions in its search for the truth about what makes us the people we are.” – Kaleem Aftab, Cineuropa

“A thoughtful, powerful examination of the deep roots of radicalisation. A film which stares its subjects right in the eyes, and does not look away.” – Zehra Phelan, HeyUGuys