An inspiring documentary from the filmmakers of School Life, YOUNG PLATO 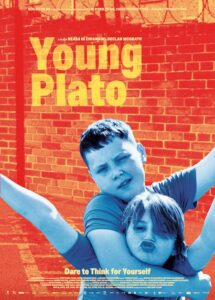 charts the dream of Elvis-loving school headmaster Kevin McArevey – a maverick who is determined to change the fortunes of an inner-city community plagued by urban decay, sectarian aggression, poverty and drugs. The all-boys primary school in post-conflict Belfast, Northern Ireland, becomes a hot house for questioning violence, as the headmaster sends his young wards home each day armed with the wisdom of the ancient Greek philosophers. The

boys challenge their parents and neighbors to forsake the prejudice that has kept this low-level civil war on the boil for decades. YOUNG PLATO hums with the confidence of youth, a tribute to the power of the possible. Co-director Neasa Ni Chainian (Declan McGrath)

and Subject Kevin McArevey join us for a lively conversation on why Neasa focused her attention in Holy Cross, her won relationship to the “troubles” of Belfast, where did headmaster McArevey pick up his affinity for philosophy, when did he realize it has the power to elicit the most important lesson a young mind can learn – how to think!

For updates and screenings go to: youngplato.com

For all screenings go to: youngplato.com/screenings

About the filmmaker – Director Neasa Ní Chianáín is one of Ireland’s most established documentary talents. Neasa trained at the National College of Art & Design in Dublin, and worked as a freelance Art Director on Irish feature film and television projects, before switching to docs in 2001. She has directed 9 single docs (4 feature length) and one TV series. The docs include ‘Frank Ned & Busy Lizzie’, which won Best Feature Doc at The Celtic Film Festival 2004, and was sold around the world, including ZDF, ARTE and YLE. ‘Fairytale of Kathmandu’ world premiered at IDFA 2007, in the Silver Wolf Competition. It was then invited to over 30 more international Festivals including Seattle (North American Premiere) and Edinburgh (UK premiere).’Fairytale’ won 3 Best Documentary / Director awards and screened on YLE andCanvas. ‘The Stranger’, funded by MEDIA, RTÉ and The Irish Film Board, had it’s world premiere at the 67th Locarno Film Festival. Her last film, ‘In Loco Parentis’ (aka ‘School Life’), has been a world-wide success, premiering in competition at both IDFA 2016 and Sundance 2017. ‘School Life’ won the Special Jury Prize in the Golden Gate Awards at the San Francisco Film Festival, and an Audience Award (Prix du Public) at visions du Reel in Nyon. Neasa was also chosen to take part in the Sydney Film Festival’s ‘Europe! Voices of Women in Film’, which selected 10 of Europe’s most promising women directors. Neasa is currently in post-production on a new feature documentary, ‘The Alexander Complex’, funded by Screen Ireland, Blue Ice and Irish Sec 481 tax credit, and has just completed production on ‘Young Plato’, a feature documentary funded by Screen Ireland, BBC, ARTE, Eurimages, Northern Ireland Screen and many other funds.

“The bright sparks and troubled souls of the classroom make for lively, sometimes heartrending company in a film that successfully links individual stories to a broader perspective.” – Allan Hunter, Screen International

“McAverey and his staff’s love for the children comes through clearly.” – Ray Lobo, Film Threat

““Young Plato” is a fascinating, sometimes funny and often touching film. It’s easy to see why the directors were drawn to McArevey and his school.” – Michael O’Sullivan, Washington Post