In 1999, filmmaker Davy Rothbart met Emmanuel Sanford-Durant and his older 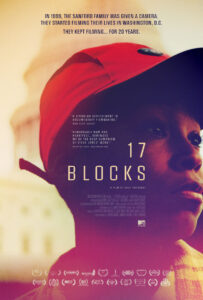 brother, Smurf, during a pickup basketball game in Southeast Washington, D.C. Davy began filming their lives, and soon the two brothers and other family members began to use the camera themselves. The result is 17 BLOCKS. Made in a unique collaboration with filmmaker and journalist Davy Rothbart, the film focuses on four generations of the Sanford Family, including Emmanuel, a promising student, his brother Smurf, his sister Denice, an aspiring cop, and his mother Cheryl, who must conquer her own demons for her family to prosper. Spanning two decades, 17 BLOCKS illuminates a nation’s ongoing crisis through

one family’s raw, stirring, and deeply personal saga. Made from more than 1,000 hours of footage, it all starts on the street where they lived in 1999, 17 blocks behind the U.S. Capitol. Director Davy Rothbart joins us to talk about his profoundly moving gut punch of a film about the lives of a family fighting against the chaos and cruelty of embedded racism, broken social institutions and pervasive violence, all of it happening a little more than a stones throw from the lawmakers who step over their dead bodies on their way to “work”. God help us if you are not moved by this film.

For news, screenings and updates go to: 17blocksfilm.com

Director Davy Rothbart’s team has partnered with organizations like Everytown for Gun Safety and Black Lives Matter D.C. on screenings, and for the film’s national release, presented by MTV Documentary Films. Its national virtual release is set for February 19, 2021, streaming from nearly 100 theaters across the U.S., and viewable on computers, tablets, mobile devices, AppleTV, and Roku.

About the filmmaker – Davy Rothbart is an Emmy Award-winning filmmaker, bestselling author and journalist, frequent contributor to public radio’s This American Life , and the creator of Found Magazine. Rothbart’s film MEDORA, about a resilient high-school basketball team in a dwindling Indiana town, based on the NewYork Times story by Pulitzer Prize winner John Branch, was Executive Produced by Steve Buscemi and Stanley Tucci, and premiered at the 2013 SXSW Film Festival. MEDORA later aired on the acclaimed PBS series Independent Lens and won an Emmy Award.  Rothbart previously directed two documentaries about the activist band Rise Against, which became best-selling DVDs in the U.S., Canada, Germany, and Sweden. A separate short film featuring Rise Against’s song “Make It Stop” was created for Dan Savage’s It Gets Better project and later won an MTV Music Video Award.  Rothbart’s radio stories featured on This American Life have reached more than 20 million listeners, and his books FOUND and My Heart Is An Idiot have debuted on The New York Times Bestseller List. He has made multiple appearances on The Late Show With David Letterman , been featured on ABC’s 20/20, Last Call with Carson Daly, MSNBC, and NPR’s All Things Considered, and been profiled in The New Yorker and The New York Times. A native of Ann Arbor, Michigan, Rothbart now lives in Los Angeles, California.

“An essential viewing doc about race & class in America… A documentary with Cinema Verite sensibilities and no qualms whatsoever about the honest presentation of its subjects, 17 BLOCKS is both heartbreaking and inspiring.” – Warren Cantrell, The Playlist

“A remarkably raw and heartfelt piece of filmmaking… At its best, 17 BLOCKS  reminded me of the deep humanism of Steve James’ work.” – Brian Tallerico, RogerEbert.com

“More than just a singular achievement in documentary filmmaking, “17 Blocks” is the result of the Sanford family’s profound act of bravery. – Mark Keizer, Variety

“There’s a searing honesty and immediacy about the footage.” – Amber Wilkinson, Eye for Film