For over a decade, ShortsTV has proudly brought the Oscar© Nominated Short 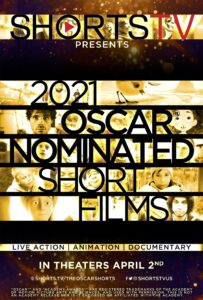 Films to audiences across the globe. This exclusive release features the year’s most spectacular short films and for a limited time is available to watch on the big screen. Each nominee is released in one of three distinct feature-length compilations according to their category of nomination: Live Action, Animation or Documentary. The films go into theaters around the world shortly after nominations are announced and are not released anywhere else until a few days before the Oscars©, when they are also made available via on demand platforms, including iTunes, Amazon Instant Video, Google Play and Vimeo on Demand. The release ensures the greatest number of viewers can see all the nominees before the ceremony, while providing short filmmakers with an unprecedented opportunity to

commercialize their movies. Carter Pilcher founded Shorts International in 2000. Coming from a background in both investment banking and law, Carter has made Shorts International the world’s leading short movie Entertainment Company, functioning as distributor, broadcaster and producer. Carter has extensive experience in short movie production and short movie entertainment. He is a voting member of the British Academy of Film and Television Arts and a member of the Short Film and Feature Animation Branch of The US Academy of Motion Pictures, Arts and Sciences (AMPAS) – the guys who pick the Oscars. For the last seven years Carter Pilcher has been the highlight of Oscar season here on Film School Radio. His insight, commitment and love of the short film format and the dedicated people who create them insures a lively and informative conversation on some of the best films you will see all year.