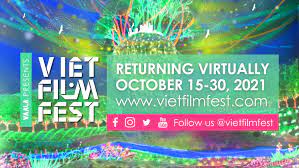 world, Viet Film Fest (VFF) showcases the best creative work by and about Vietnamese people. Viet Film Fest was created in 2003 with a small audience in auditoriums at University of California, Irvine and UCLA. Situated in the largest Vietnamese community outside of Vietnam, the

festival features films by persons of Vietnamese descent or productions that focus on the Vietnamese experience. Now running successfully for over a decade, Viet Film Fest (VFF) has expanded to draw an annual onsite audience of over 5,000 and a global fanbase. Viet Film Fest has drawn Academy Award nominated directors from France and Canada, as well as films from Israel, South Korea, Japan, Brazil, and Germany.

Through the universal language of film, Viet Film Fest brings together multiple perspectives to expand the scope and horizons of Vietnamese cinema. The Viet Film Fest Artistic Director Eric Nong joins us for a conversation on this year’s film line-up, special events, film premieres, special guests and the growth of Vietnamese filmmaking.

For news, updates and screenings go to: vietfilmfest.com

About the guest – Eric Nong – Born and raised in Orange County, CA, Eric Nong is a self-taught classic film buff who, since 2012, maintains a blog dedicated to movie write-ups. In addition to his passion for film, he has served as a volunteer and writer for Viet Film Fest 2018. Eric was also a part of Viet Film Fest 2019’s Curatorial Committee and volunteered during the 3-day event. Eric has a BA in Political Science from UC Irvine (also attended UC  Santa Cruz for the first two years of undergrad); MPP from UCI with a focus on education and poverty alleviation. In his spare time, Eric volunteers his time to teach English to Buddhist monks at Chùa Bát Nhã in Santa Ana, California.

Founding organization for Viet Film Fest – Vietnamese American Arts & Letters Association (VAALA) was founded in 1991 by a group of Vietnamese American journalists, artists, and friends to fill a void and provide a space for artists to express themselves as a newly resettled immigrant community. The original mission of VAALA was to support Southeast artists, with an emphasis on Vietnamese literature and visual arts. VAALA is a community-based non-profit organization historically run entirely by volunteers. Over the years, VAALA has collaborated with diverse community partners to organize numerous cultural events to connect and enrich communities. These events have included art exhibitions, book signings, music recitals, plays, and annual events such as the Viet Film Fest and the Children’s Moon Festival Art Contest.