The rePRO Film Festival is the only festival dedicated to exploring

women’s reproductive healthcare, awareness, advocacy and bodily integrity in America – that will be running this year from August 9-18. This year’s festival is comprised of 15 mission-aligned films (100% directed by individuals using she/her pronouns and 67% directed by BIPOC or AAPI individuals) that will be available 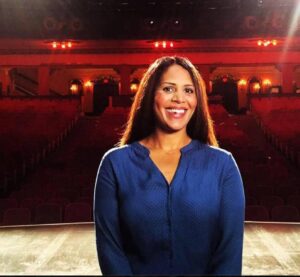 across North America. 100% of the box office revenue will also be donated to our women-led 2021 Beneficiary Organizations: Black Women’s Health Imperative, The Lilith Fund and No More Secrets. The rePro festival has put together an incredible lineup this year and we wanted to share some details on how press will be able to access it all! rePro co-founder Lela Meadow-Conner joins us for a lively and an informative update on a cutting edge film festival with a cutting edge oapproach to serving their audience.

For news, screenings and updates go to: reprofilmfest.com

An exclusive sneak peek from the film and conversation with the filmmaker, for the

upcoming feature documentary on uterine fibroids called RED ALERT: THE FIGHT AGAINST FIBROIDS, which focuses on the difficult prognosis in women that leads to nearly 300,000 hysterectomy surgeries in the United States yearly.

available for free to stream as of Monday, August 2nd. Laura will be joined by her Women of Tomorrow album co-writer and podcast co-host, Shea Carter, to explore reproductive health

issues facing women throughout history, and take an intimate look at both Bundy and Carter’s personal journeys with their own experiences with reproductive justice.

About our guest – Lela Meadow-Conner is Executive Director of Film Festival Alliance and founder of mama.film, which was a Satellite Screen for the Sundance Film Festival in 2021 and presents the rePRO Film Festival for reproductive justice, presented by Bloomberg Philanthropies. She has more than 18 years of experience in independent cinema exhibition, with leadership roles at organizations including the Tallgrass Film Association and Geena Davis’ Bentonville Film Festival.  She has participated in The Industry Academy, a program of Film at Lincoln Center and the Locarno Film Festival, has served on film juries including AFI and the NAACP Image Awards and is a frequent panelist for industry organizations like The Gotham and Columbia University. She serves on the board of Los Angeles’ iconic Vidiots Foundation, soon to relaunch in the historic Eagle Theatre. She is a co-producer for Sav Rodgers’ documentary Chasing Chasing Amy, producer for Nitzan Mager’s Strange Love, and executive producer for Emily Christensen’s Feminist Foremothers podcast.