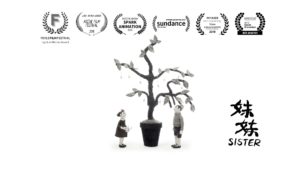 annoying little sister in China in the 1990s. What would his life have been like if things had gone differently?

Directors Statement – The genesis of SISTER came from a question I get asked a lot throughout my childhood: What is it like to grow up with a sibling? As a “Little Sister” myself, I was born as the second child in my family at the height of China’s One Child Policy. At that time, it’s really hard to have a second child in one family. Luckily, my parents put in a lot of effort to keep me and raise me. Otherwise, I would not have existed and lived a

life. Although many other “Second Child” in my generation never had a chance to get born. Therefore most of my friends don’t have siblings. Growing up with my brother has been a privilege and a bittersweet experience for me. Throughout my childhood, the question that had been asked a lot by friends is that, what is it like to grow up with a sibling? So, I have been telling stories about me and my brother since I was a kid. And I have heard stories of my friends and cousins could not have little sisters and brothers because of the one-child policy. The narrator of this film, for example, told me that he lost a younger sister when he was four years old. He always imagines how his life would be if his sister was ever born. So, I want to make a film to tell my friends what it is like to grow up with a sibling. More importantly, I also want to tell the stories of my friends, who would’ve had a different life if their siblings were born. This film is dedicated to this group memory. – Siqi Song

Director’s Biography – Siqi Song is a Chinese writer, director and animator, currently based in Los Angeles. Her animated films have been recognized internationally by Sundance, SXSW, BAFTA, and ASIFA-Hollywood. Siqi is an alumnus of California Institute of the Arts and China Central Academy of Fine Arts. She is named a Film Independent Directing Fellow in 2018 and BAFTA Los Angeles Newcomer in 2019.