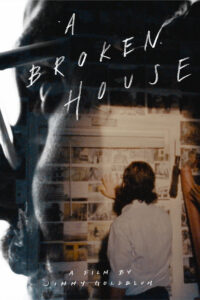 Mohamad Hafez from the time he received a single-entry visa to study architecture in the United States, and his life-altering realization that if he couldn’t return home to Syria, he could make home. A skilled architectural model-maker, he spent his years in exile sculpting life-like

renditions of his Damascus neighborhood. When the civil war broke out and his parents fled to the United States as refugees, Mohamad’s bottled-up frustration erupted on his models. In a fit of mania, he broke his artworks, leaving them shattered, bombed-out replicas of the Syrian buildings he saw on the news. And yet, when word of his broken pieces spread, Mohamad became an inspiration to refugees and

immigrants in the diaspora who dreamed of homes that only existed in memories. ‘Hiraeth’ is a film about loss and love, responsibility and identity — about homesickness for the places to which we can no longer return. Director Jimmy Goldblum stops by to talk about the heartbreaking Hafez family saga as they navigate the shattering impact that the Syrian war has had on their country, community and their fracturing family.

For more go to: jimgoldblum.com/abrokenhouse

For news and screening go to: a broken.house

Check out all of the shortlisted films at: oscars.org/94th-shortlisted

About the filmmaker – Jimmy Goldblum (d.g.a.) is an Emmy Award-winning Director & Producer based in Altadena, CA. He recently directed the pilot of “Unsolved Mysteries,” the reimagining of the 80s cult series; produced by 21 Laps (“Stranger Things”), “Unsolved” spent its first 10 days on Netflix as the most watched series in the world. He also directed an episode of the Apple+ / A24 series, “HOME;” and directed episodes of the critically acclaimed documentary series, “Chef’s Table” for Netflix (IDA Winner – “Best Documentary Series”). He had previously directed and produced Tomorrow We Disappear, a feature documentary about India’s last colony of magicians, acrobats, and puppeteers. It premiered in competition at the Tribeca Film Festival, and IndieWire listed it as one of the “20 Best Documentaries of 2014.” Jimmy’s short documentary, “A Broken House,” premiered at at Academy-qualifying festivals Hot Docs, Hamptons Film Festival, and Aspens ShortFest, and is being released in 2021. It won Best Short Documentary at Salem Film Festival.  His interactive documentary for the Pulitzer Center, “Live Hope Love,” a poetic exploration of the HIV crisis in the Caribbean, won an Emmy for “New Approaches to Documentary” and a Webby for “Best Art Website.”