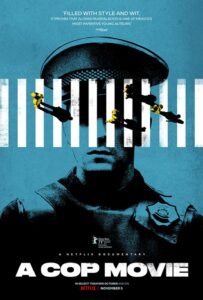 police force with the story of Teresa and

Montoya, together known as “the love patrol.” In this thoroughly original and unpredictable documentary, Ruizpalacios thoroughly blurs with the boundaries of nonfiction and immerses the audience into the human experience of police work within a dysfunctional system. What does it take to be a cop in Mexico City? Two professional actors undergo an immersive

process of “training” tobecome police officer, playing the role of Teresa and Montoya, in order to explore this question, while gaining a visceral understanding of an officers responses as they guide us on their journey from the ‘inside’. Director Alonso Ruizpalacios (MUSEO, GUEROS) joins us for a conversation on his mind-bending approach to policing in a city and country where the struggle for police officers is a never-ending question of ethics versus economics, law enforcement versus corruption.

Director’s Statement – One of the most compelling things I have discovered in filmmaking is the fact that film always deals with the present. Unlike novels, we cannot narrate in the past tense. The medium is tied to the present. What an obvious thing to say! Yet I believe every filmmaker needs to discover this for himself in order to truly understand how to use real- ity to enrich fiction — to offer new avenues of understanding — and vice versa. Like Walter Murch pointed out, the photographic nature of film condemns it, for better or worse, to be a register of the present moment. In both my filmmaking and stage work, I have sought different ways to test the limits of fiction. Whether it is by mixing actors with non-actors, by combining real events with completely made-up ones and making them undistinguishable, or by breaking the “fourth wall,” my acting background has led me naturally down this path. When this film started to take shape, it soon presented us with the challenge of how to show things that are almost impossible to document about such an impenetrable group as the Mexico City police force. How do we document the endless chain of extortions and all the nuanced behaviors surrounding it that our wonderfully generous characters, Teresa and Montoya, so openly shared with us in the interviews? It soon became apparent that fiction was going to be our aid. The opportunity to use my background in fiction, in order to delve into the world of nonfiction, turned this into a real passion project for me. In the two years that we spent doing the research, interviewing experts on public security as well as chiefs of police, I came to the realization that the notion of representation is an essential part of the police officer’s everyday life. I want to contribute to change our relationship with the police and break the prejudices that remain deeply rooted in citizens’ perception of the police. The immersive process that the actors follow is a way of making the film process itself a demonstration of what police officers go through every day. I hope that this film becomes a catalyst for generating a larger conversation around our relationship with the police and how we can work together to lower the levels of impunity.  – Alonso Ruizpalacios

About the filmmaker – Director Alonso Ruizpalacios is a Mexican film director and screenwriter. He studied at the Royal Academy of Dramatic Arts (RADA) in London. His first feature, Güeros, won over 40 prizes in festivals around the world, including Best First Feature at the Berlinale 2014 as well as awards at San Sebastian, AFI, Tribeca, Havana, among many others. It won five Mexican Academy Ariel Awards, including Best Picture. Museo, his second feature, starring Gael García Bernal, won the Silver Bear for Best Screenplay at the Berlinale 2018, as well as Best Director in Athens and Morelia, and was the first major release in a foreign language from YouTube Originals. It was nominated for 12 Ariel Awards in 2019. His short films Café Paraíso, The Cú Bird’s Last Song and Verde have been Official Selection at TIFF, Clermont-Ferrand, Cannes Critics Week, London Film Fest, Tribeca, and have won over 30 prizes around the world. He is represented by WME.

“Suffice to say, Ruizpalacios is swiftly emerging as one of the most exciting new voices in Mexican cinema.” – Peter Debruge, Variety

“Like a cop movie written by Jacques Derrida, directed with nods to Wes Anderson and Jean-Luc Godard and then remixed by Abbas Kiarostami in its efforts to tear down the fourth wall.” – Jordan Mintzer,

“Alonso Ruizpalacios voices a profound sense of powerlessness on the part of the police without sentimentalizing the abuses and biases of the profession.” – Chuck Bowen, Slant Magazine