Award-wining filmmaker Ramona S. Diaz’s latest documentary, A THOUSAND CUTS, is a blistering indictment of a free press and 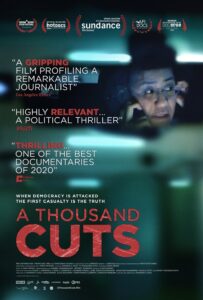 democracy are under attack in the Philippines. In the face of journalist Maria Ressa and founder of the on-line news site Rappler is holding the line and fighting back against President Rodrigo Duterte’s escalating threats of assignation and death. Duterte smear tactics and threats against Ressa (discredit journalists/media, spread misinformation, attacks on social media) are similar to what other authoritarian leaders are now using against the press. Duterte’s war on truth and journalism has become a blueprint for other authoritarian regimes around the world. A THOUSAND CUTS spotlights Ressa’s fight for justice in the country is ongoing as she was found guilty of cyber libel last month in a blatant attempt to silence one of the most outspoken critics of the Philippine President. The alarming result is not only an attack on

Democracy in the Philippines, but also a warning shot to the rest of the world. Ressa’s lawyer Amal Clooney (also featured in the film) recently penned this Op-Ed  last month underscoring the implications of this trial. Director, Producer, Writer and Co-editor Ramona S. Diaz (Motherland, Imelda) joins us to talk about the suffocating pressure being brought to bear on journalists, her admiration for those who remain committed to a free press and the hope she has for her beloved homeland.

For news and updates go to: athousandcuts.film

For screenings go to: athousandcuts.film/watch-screenings

About the filmmaker Ramona S. Diaz is an award-winning Asian American filmmaker whose films have screened at Sundance, the Berlinale, Tribeca, the Viennale, IDFA, and many other top-tier film festivals. All of Ramona’s feature-length films—Imelda (2004), The Learning (2011), Don’t Stop Believin’: Everyman’s Journey (2012) and, Motherland (2017)—have been broadcast on PBS, on either the POV or Independent Lens series. Motherland won an award at the 2017 Sundance Film Festival and had its international premiere at the 67th Berlin International Film Festival. It was nominated for an Independent Spirit Award for best Documentary, a Peabody Award, and a Gaward Urian Award from the Filipino Film Critics. She has received funding from ITVS, Sundance, CAAM, Tribeca, Catapult Film Fund, Chicken & Egg, MacArthur Foundation, the IDA, Cinereach and Creative Capital, among others. For the past four years, Ramona has been a film envoy for the American Film Showcase, a joint program of the U.S. Department of State and the USC School of Cinematic Arts that brings American films to audiences worldwide. She has conducted master classes and production workshops all over the world. Ramona was awarded a prestigious Guggenheim Fellowship and was inducted into the Academy of Motion Picture Arts & Sciences (AMPAS) in 2016, and in 2017 received a Women at Sundance Fellowship and a Chicken & Egg Pictures Breakthrough Filmmaker Award. She is a current recipient of a United States Artist Fellowship. Ramona is a graduate of Emerson College and holds an MA from Stanford University.

“[This] engrossing, galvanizing film feels more like a political thriller than an off-the-cuff investigation into embattled journalism in the Philippines, but Ressa’s seemingly boundless energy, good humor, and intelligence make her basically a power plant for the manufacture of inspiration in embattled times.” – Jessica Kiang, Variety

“A Thousand Cuts provides an expansive, revealing look at the current Filipino political situation, and it doesn’t feel like it’s warning viewers about what will happen in America, so much as telling us what’s coming next.”- Nick Allen, RogerEbert.com

“Diaz creates a rousing paean to the bravery of Ressa and her colleagues, and a clarion call to action that we should all heed.” – Christopher Llewellyn Reed, Hammer to Nail

“A Thousand Cuts is a must see for those who care about freedom of the press, democracy, and the future of one particular country-our own.” – Max Weiss, Baltimore Magazine