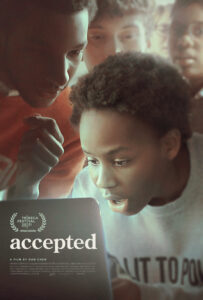 Landry, an unconventional K – 12 school housed in a sparse warehouse made famous for sending its graduates to elite universities like Harvard, Yale, and Stanford. The students aim to meet the intense expectations of Mike Landry, the imposing founder of the school who charts a relentless course towards their college dreams. When the New York Times publishes an expose on Landry’s controversial methods, the school buckles under the scrutiny. Each senior is left to contend 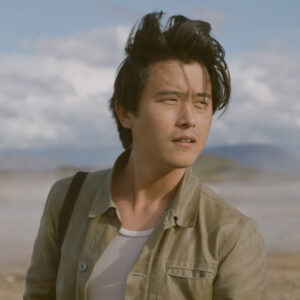 with troubling truths about their school and the college admissions system, and decide for themselves what they are willing to do to be accepted. Accepted offers a unique and intriguing look at the world of Ivy League college

admissions and the true cost of getting that first foothold into elite American society. In his first documentary feature, director Dan Chen grounds a broader look at the inequities in the American education system with unbelievable access to T.M. Landry and the deeply personal stories of four dynamic students looking to overcome countless obstacles to achieve their dreams.

About the filmmaker – Director  Producer, Cinematographer – Dan Chen is a Chinese American filmmaker in Los Angeles. He grew up in Manhattan, Kansas and graduated from the USC School of Cinematic Arts, focusing on directing and cinematography. His work has been featured at numerous festivals including Tribeca Festival and Slamdance Film Festival, as well as online at Vimeo Staff Picks, Short of the Week, The Verge, and NBC Asian America. Dan has years of directing experience in narrative and documentary, and he trained his eye as a cinematographer and analog film photographer. He sees filmmaking as a way to create life-changing memories for audiences and collaborators alike, and he tells character-driven stories about outsiders, human flaws, and coming of age. Dan is currently based in Los Angeles, developing new projects as he prepares to direct his first narrative feature film.

“The doc provides a sobering and emotional look at what, if any, options exist for those who aren’t white or wealthy in an unequal system.” – Lovia Gyarkye, Hollywood Reporter

“In the end, Accepted proves a cautionary tale about miracle solutions to complicated predicaments, as well as a lament for the genuine casualties of this con.” – Nick Schager, The Daily Beast

“A riveting doc that plays out like a grand tragedy.” – The Spool

“A conclusion that will absolutely shock viewers.” – Disappointment Media

“Tremendous documentary that poses interesting questions. It also does a great job of bringing to light the flaws in the education system.” – Nathaniel Muir, AIPT