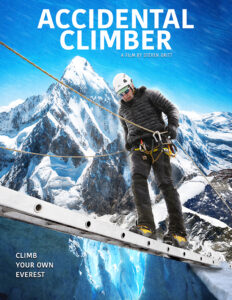 and amateur mountaineer from Sacramento, CA who at 68 years old, attempts to become the oldest American and first great grandfather to summit Mt. Everest. The world’s highest mountain is known to torture the mind, body, and soul of those who dare to do what few have ever achieved. ACCIDENTAL CLIMBER follows Jim as he embarks on a journey to transform from a weekend hiker to attempting one of the most extreme and physically demanding feats known to man. Driven by a desire to prove that age is just a number, Jim pushes his body to the limits in the

quest to summit the world’s tallest mountain. What ensued however, was the worst disaster in

mountaineering history, leaving sixteen climbers dead in a tragic avalanche and forever changing Jim’s life. Director Steven Oritt joins us to talk about getting to know Jim Geiger, working through the multiple challenges of shooting in high altitude and Jim Geiger talks about the rigors of climbing in the Himalayans and the emotionally wrenching experience he witnessed during his journey to conquer the world’s highest peak.

For news and updates go to:facebook.com/accidentalclimber

“Succinct but affecting, Accidental Climber serves as a gentle reminder that age really is just a number, and sometimes it’s not about achieving your dreams, it’s about the pursuit of them.” – Alex Saveliev, Film Threat