Director James Fletcher’s THE ACCIDENTAL PRESIDENT uncovers a detailed play-by-play from all angles on how it all went down, the state of America that led 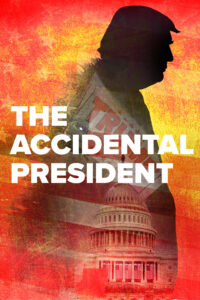 how did it? Featuring an impressively diverse and balanced set of fascinating interviews from both sides of the aisle, that includes:Donald Trump, Hillary Clinton, Bernie Sanders, Kellyanne Conway, Piers Morgan, Mary Katharine Ham, Aaron Sorkin, Anthony Scaramucci, David Pakman, Molly Ball, April Ryan, Steve Schmidt, and Van Jones. THE ACCIDENTAL PRESIDENT is an educated examination of the most controversial election in modern history, and one that every future campaign – most notably the one currently in play – should study with an electron microscope. Directed and produced by British filmmaker/journalist James Fletcher joins us for a conversation on the many twists and turns, happenstance, orchestrated chaos, massive campaign miscalculations and incompetence that results in the election of the most deified and nefarious president in American history.

For news and updates go to: interventionmedia.com

THE ACCIDENTAL PRESIDENT will be screening in limited U.S. theaters beginning Monday, June 21, 2021, and will be coming soon to Starz.

About the filmmaker – James Fletcher Director, Producer – James Fletcher is a UK television producer/director currently based in New York City. He started out working on commercial and music videos, before being hired by a number of political campaigns to produce TV ads (spots) including UK Prime Minister Boris Johnson and former Prime Minister David Cameron. He has also worked on European elections, campaigns in the US, and the Middle East. He has written articles about the business of politics, and increasing deployment of technology, especially social media as prime channels of voter communication. He is directing his first feature. The Accidental President which simply seeks to answer ‘How on earth did Donald Trump win the election of 2016?’

“I think the film is about as unbiased a story as you can get on the 2016 election.” – Alan Ng, Film Threat

“Director James Fletcher’s objective, in his words: “How the hell did he win?” The doc, with entertaining archival films and input from talking heads, offers suggestions.” – Harvey S. Karten, Shockya.com

“…more than just a trip down memory lane (a painful one or a gleeful one depending on your politics), it poses a timely “can it happen again” question for 2020.” – Tom Santilli, Movie Show Plus