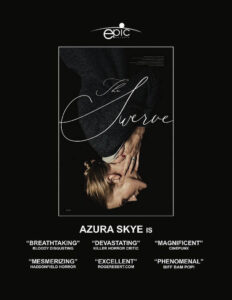 woman who seemingly has it all: two kids, a nice house, a good job as a teacher, and a husband with his career on the way up. But there are troubling signs that all is not right in her 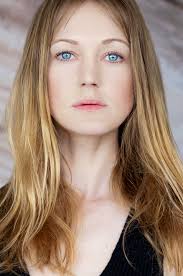 world. The insomnia. The medication for the insomnia. The dreams from the medication for the insomnia. (Are they even dreams?) And then there’s the mouse that appears in her home. Upsetting her already delicate balance, it sends her spiraling out of control. Writer/director Dean Kapsalis’ emotionally raw and unsparing film, THE SWERVE, explores a week in the life of a woman on the verge in this haunting meditation on mental illness. Actor Azura Skye joins us to talk about her preparation and collaboration with director / writer Kapsalis as well as the physical challenges of playing such a demanding role.

For news, screenings and updates go to: epic-pictures.com/film/the-swerve

About the actor – Azura Skye is a Los Angeles native whose gemologist parents named her after the mineral azurite. Skye began her career in the theatre as a child and segued into film and television in her teens, where she’s since managed to garner a lengthy resume. Skye’s credits include the films 28 DAYS, BANDITS, RED DRAGON, ONE MISSED CALL, HEAVEN’S FALL and WRISTCUTTERS: A LOVE STORY. On the small screen she has appeared in numerous television shows including BUFFY THE VAMPIRE SLAYER, HOUSE M.D., THE MENTALIST, AMERICAN HORROR STORY, GIRLS, and RIVERDALE. She starred in the NBC comedy WORKING THE ENGELS and in the independent feature TAKE ME TO THE RIVER, which premiered at the 2015 Sundance Film Festival.

“…no less irresistible and poisonous than the nation’s prevailing patriarchy, making Holly’s violent deviation from her prescribed homemaking path the last tragic swerve of a woman in trouble.” – Anton Bitel, Sight and Sound

“It is an amazingly cathartic experience. I’m incredibly impressed that Dean Kapsalis was able to convey the suffering of a woman so well, without belittling or objectifying Holly in the process.” – Lorry Kikta, Film Threat

“A beautiful and brutal study of depression, paranoia and the descent into the unthinkable. The message that Kapsalis voicing is one that, like Holly, needs to be heard.” – Kat Hughes, THN