Beautifully layered and expressionistic, AFTER SHERMAN is a story about 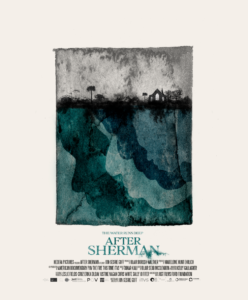 inheritance and the tension that defines our collective American history, especially Black history. Director Jon Sesrie Goff follows his father, a minister, in the aftermath of a mass shooting at his church in Charleston, South Carolina to understand how communities of descendants of enslaved Africans use their unique faith as a form of survival as they continue to fight for America to live up to its many unfulfilled promises to Black Americans. Goff’s feature documentary debut, lays out intimate accounts of the lives of the

Black community in the filmmaker’s Black Belt hometown, on land that has been in his family for 150 years, where they were once enslaved. Now transformed, primarily on the backs and resourcefulness of Black people, and thriving as a wedding destination, it stands as a

reminder of the painful, cross-generational consequences of racism, and a validation of life’s beauty. Pure cinematic poetry informed by a history still to be conclusively reckoned with, AFTER SHERMAN foregrounds the Southern Black experience while posing complicated questions about home and ownership that it isn’t so presumptuous to believe it can readily answer. Director Jon Sesrie Goff joins us for a conversation on the many ways that our country’s hidden history, bigoted culture, blinding greed, deceitful religious leadership and cynically racist political system has failed an astonishingly resilient people.

For news and updates go to: aftersherman.com

Director’s Statement – You can reach the land by dirt road, or by boat if you sail down the Santee River towards the Atlantic. This plot of land has been in my family since the 1860s, when it was purchased by my ancestors after emancipation. The Hopswee plantation, where they were once enslaved still stands a mile away, now a wedding destination. The land presents unanswered questions about ownership, belonging, citizenship and history. Its transformation from marsh to the mainline of American rice and wealth was predicated on the skilled labor and ingenuity of Africans, primarily from the rice coast of western Africa. The fields were abandoned after Emancipation, when the formerly enslaved left for other trades. The land’s potential still exists. One day I will inherit this land. And I will inherit all of this history and presence that comes with it. – Jon Sesrie Goff

About the filmmaker – Jon-Sesrie Goff is a multidisciplinary artist and arts leader. He has an MFA in Experimental and Documentary Arts from Duke University. With extensive experience in media and film production, Jon has offered his lens to a variety of projects spanning many genres including award-winning documentaries, including Out in the Night (POV, Logo 2015), Evolution of a Criminal (Independent Lens 2015), and Spit on the Broom (2019), among several other projects. His personal practice involves extensive institutional, community, and personal archival research, photo, and film documentation, as well as oral history interviews in the coastal South on the legacy of Black land ownership and Gullah Geechee heritage preservation. Jon engages with his work from the paradigm of a social change instigator.

“Jon-Sesrie Goff’s “After Sherman” serves as both a psalm of thanksgiving and a cry of lamentation for the family legacy he claims as well as the cultural history he cannot escape.” – Marshall Shaffer, The Playlist

“While After Sherman fulfills [its] mission, it’s most captivating when it burrows into Goff’s personal history, recording the stories and rituals of his Gullah Geechee community.” – Lovia Gyarkye, Hollywood Reporter