Aengus James’ Award-winning documentary AFTER THE MURDER OF 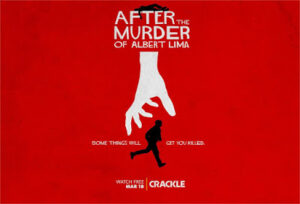 ALBERT LIMA tells the story of a son obsessed with capturing his father’s killer. Paul Lima has spent over a decade seeking justice for his slain father, Albert. Though convicted, Albert’s murderer has remained free in Honduras. After years of the legal system failing him, Paul takes the unorthodox step of hiring two

bounty hunters to travel with him to Honduras to track down and capture his father’s killer. This riveting, and, at times, darkly comedic documentary explores both the importance

of family and the dangers of taking the law into your own hands. Director Aengus James (I Am Jazz, Scandalous) joins us to talk about the tragedy that has been visited upon the Lima family, the heart-stopping actions that Paul and James’ crew took in the bring this story to life and the collapse of any semblance of civil society in Honduras.

For news, and updates go to: after-the-murder-of-albert-lima

To watch go to: crackle.com/watch

Director’s Statement – A man hires two bounty hunters to help him kidnap his father’s killer in Honduras… what could possibly go wrong? From the beginning, this was a bad idea.  At the time we filmed this documentary, a report on NPR named Honduras the murder capital of the world; it had a case closure rate of just 2.5%. When I first met Paul (Lima), he was at a breaking point. The desperation he felt was echoed by victims’ families in Honduras we spoke to. What is justice in a broken and horribly corrupt system? Is vengeance just? Paul’s obsession for justice and his moral struggle with vengeance compelled me to follow him on this deeply flawed adventure. – Aengus James

About the filmmaker – Aengus James is an award-winning filmmaker and television producer. His recent works include SCANDALOUS (Magnolia, CNN, BBC), Undercover Billionaire (Discovery), and the GLAAD Media Award-winning I Am Jazz (TLC). Aengus began his career serving as Barry Levinson’s cinematographer in POLIWOOD.  AFTER THE MURDER OF ALBERT LIMA follows Aengus’ directorial debut and IDA award nominated documentary comedy AMERICAN HARMONY. He has created and directed content for global brands and non-profits, and his work has received numerous honors including special recognition from the White House and the United Nations for raising awareness on issues including veterans’ mental health and women’s healthcare around the world. Aengus is the co-founder and head of This is Just a Test.

“More than once I had to hit pause to investigate if what I was seeing actually happened, but it ended up winning me over with its absurd and equally emotional and healing story.” – Jorge Rivera Rubio, QiiBO

“After the Murder of Albert Lima is a truly singular experience, stuck somewhere between laughter and tears.” – Rob Aldam, Backseat Mafia