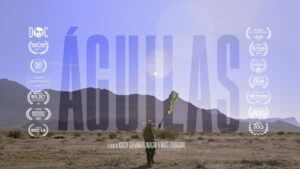 and Maite Zubiaurre, AGUILAS, tells the story of the Águilas del Desierto, a group of volunteers who look for migrants who go missing crossing the border—often finding only their remains. Once a month, along the scorching southern desert border in Arizona, one group of searchers, the Aguilas del Desierto, set out to recover missing loved

ones. These  volunteers comprised of construction workers, gardeners, domestic laborers by trade, carry out their solemn task. Águilas poetically lays bare the tragic reality of migrant

death by venturing deep into the wilderness of the borderlands. Co-directors Kristy Guevara-Flanagan and Maite Zubiaurre join us for a conversation on this little known story of selfless service, the United States policy of deliberately funneling refugees into the most dangerous terrain along our shared border and thousand of people who’s remains are found and the thousands more who the desert will never give us back.

For more information go to: gonella-productions.com/aguilas

For news and updates go to: aguilasdocumentary.com

About the filmmaker – Kristy Guevara-Flanagan has been making documentary and experimental films for nearly two decades, starting with a 1999 experimental documentary about a blow-up doll. Her first feature-length film, Going on 13 (2009), covers four years in the lives of four adolescent girls; it premiered at Tribeca and was broadcast on PBS. Kristy also produced and directed several short films, including El Corrido de Cecilia Rios (1999) which chronicles the violent death of 15-year-old Cecilia Rios. It was an official selection of the Sundance Film Festival and subsequently broadcast on the Sundance Channel. Her feature, Wonder Women! The Untold Story of American Superheroines (2013), traces the evolution and legacy of the comic book hero Wonder Woman as a way to reflect on society’s anxieties about women’s liberation. The film garnered numerous awards, premiered at the South by Southwest Film Festival and was broadcast on the PBS series Independent Lens in 2013. Her recent short,  What Happened to Her (2016) premiered at the Hot Docs Canadian Film Festival, where it  received an honorable mention for best short. What Happened to Her and her in progress feature documentary, Body Parts,continues her exploration on the themes of gender and representation.  Kristy’s work has been funded by ITVS, the Sundance Institute, the Tribeca Institute, Latino Public Broadcasting and California Humanities. She is now an Associate Professor at UCLA.

About the filmmaker – Maite Zubiaurre was born in Bogotá, Colombia, and grew up in Germany and Spain. She has a Ph.D. in Comparative Literature from Columbia University and is a Professor in the Humanities at UCLA. Before joining UCLA, Maite taught at UT Austin, UNAM (Mexico), ITAM (México), and USC. She is the author of numerous books and articles, and has recently published a co-authored monograph on urban humanities and new practices of reimagining the city (MIT Press), and a book on the cultural uses of contemporary waste that reflects upon urban refuse and upon the archival practices of the personal belongings that migrants leave behind along the US-Mexico border (Vanderbilt UP). She is presently working on a co-authored monograph on cultural representations of migrant death at the US-Mexico border; directing a research team working on a digital “thick” map of the US-Mexico borderlands; and co-writing and co-producing a feature documentary on border art with Emmy-awarded Tijuanan film collective Dignicraft. She is co-PI and core faculty of the Mellon Urban Humanities Initiative, where she teaches border studies and Mexican cultural studies and street art, and co-PI of the Mellon Sawyer Seminar on “Sanctuary Spaces: Reworlding Humanism.” Maite Zubiaurre is also  a visual artist and collagist: under the name of Filomena Cruz she has initiated a number of artistic interventions, among them her longstanding  Venice, CA installation “The Wall that Gives/El muro que da.”