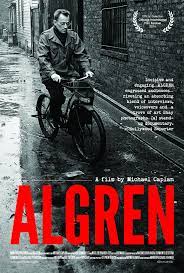 drops us into the gritty world, brilliant mind, and noble heart of writer Nelson Algren. Exploding onto the national scene in 1950 after winning the first-ever National Book Award for The Man with the Golden Arm, Algren defined post-war American urban fiction with his brilliant depiction of working class Chicago. Hemingway declared him second only to Faulkner; Vonnegut dubbed him a literary groundbreaker. Hollywood soon came calling, immortalizing his breakout novel with none other  than Frank Sinatra in the lead

role. Algren even won a notorious place in both the heart and work of France’s premiere feminist, Simone de Beauvoir. Including never-before-seen archival footage, newly uncovered audio recordings and his own rarely seen, personal photo collages, ALGREN charts the rise and fall of a man whose transgressions, compassion and thirst for justice pushed him to dedicate his life and career to giving a voice to the voiceless. Through interviews with Algren’s

friends, literary experts and artists – including William Friedkin, Russell Banks, Philip Kaufman, Billy Corgan and John Sayles – the film is an intimate, witty and even antagonistic portrait of a tireless champion of America’s most marginalized. Director Michael Caplan (Stones from the Soil) joins us for a conversation on what inspired him to explore the world of a groundbreaking, deeply American writer who has never reached the level of recognition and acclaim of his literary brethren.

For screenings and updates go to: firstrunfeatures.com/algren

About the filmmaker – Michael Caplan is an award-winning Chicago-based independent film director, producer and educator. He is currently developing several feature films, including a film written by acclaimed Chicago writer, Joe Meno, and a documentary series that illustrates the connection between the smallest microbes in the ocean to climate change and worldwide pandemics. Caplan also directed and wrote Stones from the Soil, a documentary about his father’s escape from the Nazis, which showed on national PBS. Caplan is an Associate Professor in the Cinema and Television Arts Department at Columbia College Chicago.

“A riveting, comprehensive depiction of an author that Ernest Hemingway declared second only to William Faulkner in the pantheon of U.S. writers.” -Duane Byrge, The Hollywood Reporter

“A documentary that fuses the writer and his city in a cosmology of grinding toil and unexpected beauty” -Barlo Perry, Paris/LA Magazine

“An extraordinary portrait of a major author who has fallen into the realm of the forgotten despite his many successes.” -Neeley Swanson, Easy Reader News