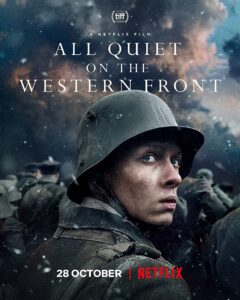 soldier on the Western Front of World War I. Paul and his comrades experience first-hand how the initial euphoria of war turns into desperation and fear as they fight for their lives, and each other, in the trenches. From German-born director Edward Berger as created a cinematically unique adaptation from a German perspective of Erich Maria Remarque’s eponymous novel ALL QUIET ON THE WESTERN FRONT. Considered by

many literary scholars to be one of the most effective and moving anti-war works of all time. The film also includes the story of the German politician, Matthias Erzberger (Daniel Brühl), known as one of the lead diplomats responsible for negotiating the armistice between the Kaiser (German) forces and the Allies. German nationalists later blamed him for the financial collapse and political instability that beset post-war Germany. That chaotic period

eventually gave rise to Adolf Hitler and his fascist reign of terror. German nationalist accused Erzberger of treason and assassinated him. Director Edward Berger stops by to talk about the reasons he felt the time was right to revisit the stark and senseless slaughter of World War I

and the 44 million people who died, his decision to focus the story on the young and impressionable young men who enlisted in the German infantry and to highlight the relatively unknown aspect of the war that examines the bloodless political calculations that went into negotiating an end to “the war to end all wars” which led to an even deadlier worldwide conflict 20 years later that killed nearly twice as many people.

Netflix.com/All Quiet on the Western Front

“Even though this version of “Quiet” predictably ends as its predecessors did, the last scene still comes as a gut punch, one that reverberates with even more significance in 2022 as war once again darkens the skies over Europe.” – Cary Darling, Houston Chronicle

“Bolstered by Volker Bertelmann’s gorgeously composed ominous score and by James Friend’s breathtaking cinematography, this latest incarnation of this much loved novel has proven to be its most faithful yet.” – Linda Marric, The Jewish Chronicle

“A wrenching, visceral adaptation of a work that is almost a century old, written when ruined veterans could still hear the sound of the gunfire in their dreams.” – Fionnuala Halligan, Screen International

“A devastating portrait of war from an alternate viewpoint rarely seen on screen, Edward Berger’s interpretation of ‘All Quiet on the Western Front’ is a visceral and harrowing masterpiece.” – Doug Jamieson, The Jam Report