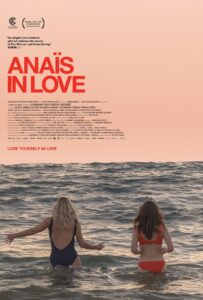 (Pauline Enslaved, Joujou) comes a vibrant new French romantic-comedy ANAIS IN LOVE. The film is a sensitive portrait of a complex and impulsive young woman.  Anais, beautifully portraited by Anaïs Demoustier (Alice and the Mayor, Pauline Enslaved, Sweet Evil) is thirty and broke. She has a lover, but she’s not sure she loves him anymore. After attending a friend’s party, Anaïs meets and falls into an affair with a middle-aged publisher named  Daniel, played by Denis Podalydès (The Conquest, Caché, The Da Vinci Code). As their relationship quickly begins to fall apart, Anaïs discovers and

becomes enchanted by the literary work of Daniel’s wife, Emilie, played by Valeria Bruni Tedeschi (Like Crazy, Human Capital, It’s Easier for a

Camel…), and after a chance encounter with Emilie, Anais begins to pursue her. A lighthearted nod to classical romances, the film explores the longings of wayward hearts. ANAIS IN LOVE made its world

premiere at Cannes International Film Festival Critics Week. Director Charmine Bourgeois-Tacquet joins us for a bilingual conversation on the striking the right balance of drama, comedy and calamity, working again with Anais Demoustier to create a recklessly complex character with the innate ability to charm.

For news and updates go to: magpictures.com/anaisinlove

To watch go to: magpictures.com/anaisinlove/watch-at-home

Anaïs in Love will open theatrically on April 29 and digitally and on-demand May 6.

About the filmmaker – Director / writer Charline Bourgeois-Tacquet worked for a while in publishing. In 2016 she directed her first self-produced short film. In 2018, she garnered positive attention for her second short film, Pauline Enslaved, chosen for the Semaine de la Critique section of the Cannes Film Festival and then at the Clermont-Ferrand Festival where it received a Special Jury prize and the Telerama magazine press award. This same film was also pre-selected for the 2020 César awards and won a number of prizes in international festivals. Les Amours d’Anaïs (Anaïs in Love), her first feature film, is selected at the Cannes Film Festival’s La Semaine de la Critique in 2021, where it was screened as the film of the 60th anniversary.

“A summery and youthful film, Anaïs in Love shares a spirit with some all-time-great stories, basking in the moment and celebrating where each one could lead to next.” – Scott Wilson, One Room With A View

“Yeah, Anais gets everything she wants, but sometimes, its good to let women win.” – Valerie Complex, Deadline Hollywood Daily

“A love story as warm and refreshing as the Parisian summer its set against, writer-director Charline Bourgeois-Tacquets feature debut iAnas in Love/i is a dizzyingly euphoric delight.” – Andrew Murray, The Upcoming