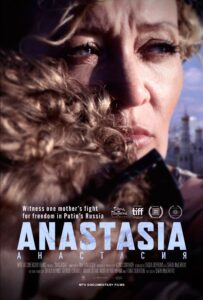 activist Anastasia Shevchenko as she faces the brutal repercussions of speaking out against her government. She endured house arrest for two years,

and became the first person found guilty of “organizing activity of an undesirable organization” by a Russian court, for her work with the Open Russia movement. Amnesty International declared her a “prisoner of conscience.” While Anastasia was under arrest, her teenage daughter Alina was hospitalized and died alone, becoming an early example of the Russian regime’s willingness to use the separation of

parents and children as a way to silence dissent. This intentional rupture of the parental bond is a denial of the elemental human right to care for our children. The spiritual and emotional burden that Anastasia carries

makes her determination even more remarkable, as she continues to raise her two other children. One morning she gathers them, and her elderly mother, and takes a train across Russia to the Black Sea, a journey that this intimate story captures with poetic visual grace. Against the bright horizon, they come to terms with the family’s loss, and Anastasia realizes the only way she can continue to fight is to leave her homeland. Director Sarah McCarthy joins us for a conversation on a woman facing down an authoritarian regime, the loss of her daughter, the daunting challenge of pulling together her shattered family for a final tribute to her departed daughter.

For more go to: anastasiafilm.com

About the filmmaker – Sarah McCarthy has brought stories from Russia, the Philippines, India, Saudi Arabia, America and the United Kingdom to millions of people in over 35 countries. Sarah has premiered films at international film festivals all over the world, including Telluride, the Toronto International Film Festival and DOC NYC. Sarah’s films have been broadcast on HBO, Netflix, Paramount, ESPN, Channel 4 and the BBC. Sarah’s work has received critical acclaim in The New York Times, Washington Post, Variety, The Hollywood Reporter and Screen International and she was recently named in the Radio Times list as one of the “30 Most Powerful Women in Film.”