ANATOMY OF WINGS is the direct result of an after-school film project, where 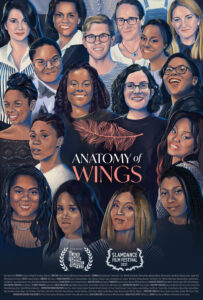 ten Black middle school girls gathered each week to collaborate with their Black and white mentors on a feature-length documentary about their own coming-of-age in Baltimore City. Weeks turn into years. Then, shortly before the girls’ high school graduations, a sea of misunderstanding arises about what’s to come. This self-defined ‘second family’ is left to question if their solidarity will survive the realities of living in a world of racial inequity.WINGS mentors created a safe space for the girls to practice filmmaking and share life experiences, questions and  personal moments such as proms, first time gynecologist visits and accomplishments. Their lives in Baltimore reflected their corresponding community and, once in high school,

the girls began inviting their best friends to join the program. The result: we became a group of 10. What began as a videography program evolved into

a powerful space of sharing for ten years, where ten girls, mentors, professors and college students at MICA created a family. The co-directors Kirsten D’Andrea Hollander and Nikiea Redmond join us for a conversation on the power of storytelling, especially for young women of color, living in a community bereft of opportunity can be a powerful and unmistakable call to arms for real social change.

For news and updates go to: anatomyofwings.com

Watch Anatomy of Wings, premiering at the 2021 Slamdance Film Festival

About the filmmaker – Kirsten D’Andrea Hollander is a full-time professor at the Maryland Institute College of Art (MICA), where she currently directs the MFA Filmmaking program. Equipped with an undergraduate degree in Painting from MICA in 1988, she turned to documentary filmmaking after receiving an MFA in Imaging and Digital Arts from UMBC in 1997. Having taught in higher education for 22 years, Hollander explored how the camcorder can be a collaborative tool to bear witness. In 2008 she launched the ‘Wings Video Skills After School Program for Girls’ and the recently completed ‘Anatomy of Wings’ feature length documentary. In 2011 Hollander was selected for an Independent Filmmaker Project Fellowship to launch her first feature length documentary, ‘Us, Naked: Trixie & Monkey’, which premiered with the DOC NYC film festival in 2014. In 2015, ‘Us, Naked: Trixie & Monkey’ received Best International Feature Length Documentary at the Netherland’s DOCfeed Film Festival and Best Feature Length Documentary at New York’s Coney Island Film Festival. The film went into international distribution with Random Media/The Orchard in 2017. Hollander lives in Baltimore City with her husband, son, and two silly dogs.

About the filmmaker – Nikiea Redmond received her Bachelors in Corporate Communication from the University of Baltimore in 2011. Growing up in East Baltimore Redmond became a mentor to the youth coming-of-age around her. Being a child in Baltimore’s impoverished neighborhoods, researching the history of slavery in her family, traveling with Freedom Schools focused on teaching African history – and working professionally in the public-school system has provided Redmond with the experience to tell the ‘Anatomy of Wings’ story with a direct understanding of societal makeups and the human rights she wishes to see in the world. Additionally, Redmond serves as a liaison bringing together political organizations, community groups and stakeholders in East Baltimore. The Afro-American Newspaper presented Redmond with the ‘Sam Lacy Award for Youth Leadership’ in 2004. She is also a 2015 recipient of the ‘Black Wall Street Journal Award’ for her work in Baltimore City.